Of Gods and Capes

Why do people worship a god? What sets a god apart from humans?

The answer seems fairly obvious but for some people it is a subtle distinction, even in our real world. But what about a world, a multiplex of universes, where hordes of beings run around with what we’d consider god-like power?

The DCU [DC Comics universe] contains heroes who can theoretically (if you twist physics on its ear) juggle planets with their pinkies. There are folks who effortlessly travel back and forth through time, who contain the power of entire suns within themselves, who can command reality to change in the blink of an eye.

Gods, right? Nope, they’re something called superheroes. Or supervillains, depending on where their personal moral boundaries lie.

But in the DCU and within the Wonder Woman mythos especially, there are also beings called “gods.” Wondie specializes in the Greek Olympian pantheon, but she’s also palled around with Egyptian, Roman, Norse, Indian, and Hawaiian gods. There’ve been strange folks as well who called themselves “New Gods.”

Perhaps the primary differentiation between gods and superheroes is the matter of worship. Oh sure, Wonder Woman has had a few worshippers, and I believe Superman has as well, but these were isolated incidents. You know, some people will worship anything and drink grape Kool-Aid to celebrate their high holidays.

But why shouldn’t people of the DCU worship their superfolk if they have the same powers as gods? 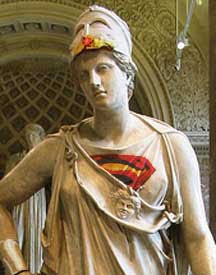 Gods make covenants with their worshippers. They’ll take care of them. They’ll give them riches or health or the perfect love. They’ll grant some form of eternal life. They’ll make their crops come in abundantly, and cause terrible storms to back off.

Gee, that’s sort of like what superheroes do, only they do it because it’s the right thing to do and not because they want to be worshipped.

Back before science had been conceived, people needed explanations for why life worked the way it did. Thus they created (or discovered) gods and worshipped them in order to make life better.

In the DCU’s Ancient Greece, apparently, people began to forget the gods, for the Olympians created a superior race (formed around used souls, sort of like a heavenly chop-shop) whose mission it would be to bring humans and their worship back to the gods. Thus we discover (1) that the gods need worship to power themselves, and (2) the origin of the Amazon race.

These Amazons were set in Greece to bring the metaphorical sheep back to the fold. Can’t you hear them now as they go door to door?

“Hail, brother Leonidas! Have you heard the Good Word about Gaea’s Way? Our head priestess has prepared a pamphlet we’d like to leave with you...”

Needless to say, the peaceful Amazons learned the art of defense quickly.

The Greeks attacked the Amazons in larger and larger numbers until by necessity they became experts in war. One god, Ares, actually set in motion the downfall of the nation that was supposed to have helped his family regain their power. The Amazons lost their way for a time but were allowed to return to their gods’ good graces if they guarded the world from terrible recurring threats coming through Doom’s Doorway.

Even with this loyal nation’s worship, the Olympian gods retreated for centuries (saving power?), only to emerge in these past few years within the DCU to counter Ares’ new plots for world domination. With the birth of Wonder Woman humanity once again knew the Olympian gods were alive and ready to be worshipped.

But now there were so many others with similar power: Superman and all his ilk, Martians, Daxamians, wizards of unimaginable might, scientists who could bottle the secrets of the universe.

Often gods have been seen to be as easy as a supervillain to vanquish. There have been rare exceptions that have raised a bit of a sweat on those involved. But should gods be on a par with superhumans? Shouldn’t they exist on an entire level above them, if not two or three? Shouldn’t there be a distinct difference between gods and capes? 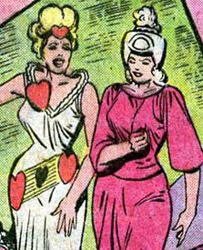 (At left: Steve Ditko's version of Aphrodite and Athena. Not very imposing, are they? Construction paper hearts, bah!)

[After I posted this list on the CBR MBs Walter Simonson replied to this rule and "Do you hear me, New Gods?" comment with:

"They do hear you, Carol. But really, gods wear whatever they want to.

I believe that out of all the comics professionals in the world, he would indeed be the one to know.

• Gods are aspects of nature and human interests and as such can change their appearance to suit the angle they're working on. Thus we can have both a helmet-wearing Athena and one who totes a Kindle. They just don’t do it wearing Spandex.

• Gods are rarely accessible. We will not see Amazons going up to Olympus every day for afternoon tea or Diana strolling with the god of her choice. Gods are called by extremely high ceremony and MAY mistily appear or not, or may only speak through an oracle.

• Usually when a god wants to make an appearance, they take on the form of a known human and speak to the person they want to. Then the god leaves and the person may spot the friend elsewhere whose form the god took, then realize that they must have been talking with a god. Lately Gail Simone has been having gods speaking through existing humans using fancy-fontted speech, which is also quite acceptable, if often difficult to read.

• Gods work behind the scenes. A sharp-eyed Amazon may see the ghostly image of Artemis when she looks at the moon, or perceive the presence of Hephaestus when working at the forge, inspiring her. Batman won’t see anything mystical because he’s not a believer. (This is the Field of Dreams concept at work and was utilized well in The Hiketeia.)

• If things are dire enough that a god has to make a personal appearance, the human greeting said god should have shoes off, knees on the ground, eyes averted, and speak humbly if they dare speak at all.

• Though a superbeing may create big things or lift big things or destroy them, only a god (besides being able to do the same) can imbue those objects with purpose. A godly weapon, for example, would be the same as any other weapon, but it has a particular purpose which thus gives it greater ability to accomplish such.
Subclause 1: Godly weapons are extremely rare and not at all as common as kryptonite or Starbucks.
Subclause 2: The person who wields a godly weapon must be extremely skilled and/or powerful enough to handle said weapon. One cannot just pick up a god-forged axe off a subway seat and conquer the world with it. Likely one would accidentally hack oneself to death with it instead. Perhaps the weapon would be programmed to harm those who dare touch it without being of high enough caliber.

• Gods have limits. Greater gods have fewer limits than lesser gods. These should be defined.

• Gods are much more emo than regular characters. They have shorter fuses as well. They do not believe in Dr. Phil. They will strike down their enemies quickly and harshly, though they may regret things after their enemies have died. Gods do not forgive well at all. This is why ceremonies to call them have to be so complex, to show the gods that their worshippers are 100% supportive of them and their inflexible egos. It is a small miracle that Diana has "talked down" some gods in her time.

• Gods are as immortal and as powerful as the concepts they represent. Worship also plays a percentage in powering them, but the state of that universal concept is the real power. Remember that gods exist across dimensional lines, so even though, say, Isis isn't widely popular on Earth-1, on Earth-17.5 she's the big kahuna, and so her power gets a good boost from that worship. Earth 46.88 doesn't have any war, so Ares doesn't get any boost from that corner. On Earth 3.14159 Ares was never worshipped but there's an awful lot of war so his presence is felt there and powered up across the multiverse.
Subclause: So you think there are only 52 universes? Just wait a while. DC’s lack of continuity assures us that there are at least a few more out there.

• Gods cannot travel through time in a non-normal manner. This would allow them to gain control of every situation, correct their mistakes, and change history. If a schlub like Bill Murray’s character in Groundhog Day can manage to change himself, his future, and that of several other characters while dealing with one small day’s worth of time travel, imagine what even the most minor god could do if they could travel through time. Let’s leave this meddling to scientific human-types using time bubbles and whatnot. In fact, let’s say that gods cannot even utilize a device like a time bubble.

• One thing comics gods can NEVER do is create a soul. This is reserved for some consciousness far, far above their level. Gods can create stuff and animate it, but it won't contain true life. (That's not to say that a wandering soul couldn't possess that stuff...) Can the Source create souls? Perhaps, but DC’s Source (from Jack Kirby’s New Gods mythos) has always seemed namby-pamby to me, too low-level, mean and downright goofy to be taken seriously. OTOH, Gaea might begin to have the power to create a soul. Maybe.

• There are beings who call themselves New Gods. Their magic does not arise from eternal cosmic concepts, but rather from mega-advanced technology. People like Granny Goodness don’t have any personal powers that we’ve really seen, though she, like most of the New Gods, can utilize some of their tech. (They can press buttons.) A handful of them are very advanced but only Darkseid hovers on the brink of minor godhood. He’s not there yet, though he thinks he is.

So what’s your definition for how a god is distinctly different from a supercape? Or do you think there’s an advantage to the two concepts existing on the same level?
Posted by Carol A. Strickland at 8:40 AM