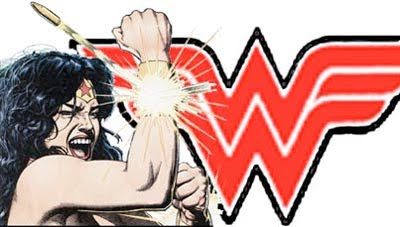 I made a schedule for blogging and then completely disregarded it as life sped up. At the very least I'd hoped to space some of my Star-Spangled Panties reprints so people knew I wasn't completely obsessed with Wonder Woman.

NaNoWriMo (aka "Nanoo Nanoo") is National Novel Writing Month and occurs each November. I've never taken part. I mean, their idea of novel-length is shorter than mine is, and I just can't write a full novel in one month unless I were to lose my job. (Knock on wood that doesn't happen... unless the lottery comes through.) But I can treat it like I do "Book in a Week," in which the theory is that you knock out a first draft of a novel in a week (as unlikely as doing it in a month), but in which most people just set aside everything else so they can concentrate on their writing for a week. I can do that. I think.

Why? I've got novels that need serious rewriting I should be working on instead. My wip's second draft isn't finished. But I'll use NaNo as an excuse to fill my creative banks and get rid of some serious negative energy that the current run of Wonder Woman (and previous runs) has cast over me.

Y'see, I want to write a Wonder Woman novel.

No, it's not going to be fanfic. And I realize the probabilities of getting it published are extremely slender. (Though rumors of a movie and, in the past week, of an upcoming TV series, are rampant, and so the timing would be right.) This will be structured and thought through like I would a real novel bound for a bookstore. No, Jean-Luc Picard will not be making a guest appearance. No, there will be no slash with Superman. Or Io.

I'm having fun mulling this over in background mode during my days. How will I present Wondie? Not like I think Wondie should be in on Earth-Strickland, but rather as an amalgam of her best eras, the way she should be in her comics. She'll have the energy of the Golden Age, something we haven't seen in the book since, well, the Golden Age. She'll be mid-powered—perhaps Silver Age or Golden Age level. (Which fluctuated greatly, but I'll have it defined.) There'll be touches of Bronze Age and Plastic Age, and perhaps even a dab of Dark Age, if I can find anything worth preserving from that.

This week is vacation. Painting is my priority, as well as using evenings to make sure that second draft is completed by November so it can rest in a digital drawer and "rise" like bread dough, to be brought out in December for a fresh look. Each day this week I hope to decide on another basic element of my Nano novel.

So far I know that my protagonist is Diana of Themyscira, aka Wonder Woman. Our secondary plot will be headed by Diana's younger sister, Donna Troy, aka Troy. Angle Man's going to be a villain who gets a chance at reformation, but he's not going to be the Big Bad, as I've never been able to take AM all that seriously. Mike Schorr or Micah Rains—I can never recall which was which—will show up as a major supporting character with the possibility of love interest somewhere along the line, possibly the very end. This will not be a romance.

Haven't figured my plot yet. I'm reading a "20 Basic Plots" book that's giving me a different view on starting points. First, though, I'm starting with the Enneagram to figure out Diana and Donna's basic personality, what lessons they both need to learn, and what their weaknesses in character might be. Fun! At this pre-study point I think Diana is an 8: Protector, and Donna is a 2: Giver. I'll report back on this later, but do you have any ideas?

I'm also saving up scene ideas. When I read a Gail Simone WW story, I get the impression that she came up with "spectacle panel" ideas and then had to figure out how to string 'em together. Often the stringing didn't work well. But having the image in mind for a particular splashy turning point is a good idea, I think. And watching part of that Jackie Chan movie yesterday reminded me that Wonder Woman should fight not like Batman, not like Lady Shiva or Super Gladiator (though she should be able to function occasionally in those roles), but like Jackie Chan. It fits her ebullient, Golden Age ambiance best, and would also make her more unique in the superhero community. It would also provide for lively, fun action—no need for bloody swords!

Wonder Woman should be unique in her world. I think that's why writers have such a difficult time with her because so many of them are trying to squeeze her into a traditional superhero mold that she just doesn't fit. Look at the best WW writers: Marston, Sekowsky, Perez, Messner-Loebs, Simone. When they wrote their most memorable WW stories, they showed her outside the bounds of ordinary superheroing.

Well, I'm going to try that. And I'm going to have a ton of fun doing it. Wish me luck, and any out-of-the-box suggestions you might have, feel free to make them!
Posted by Carol A. Strickland at 8:58 AM

Strick,
i like the idea of your WW novel featuring our Star-Spangled Princess as an amalgam of the best incarnations of the character.
sounds great!!!
:o)

Carol, congratulations . You are the one who should be writing a Wonder Woman novel. And I am glad you are taking a bit from each of Wonder Woman's eras to make your total Amazon. It will be nice to see a story featuring both Donna Troy and Diana, they had very little time together in the comic books, excepting the 'impossible tales' of the Kaniger era. Lastly glad to see no swords or shashing. Thats not the kind of heroine Wonder Woman really is.

Well, there might be some slashing (but not for shock value). I want Diana to be preaching reformation and Donna to be saying that sometimes one has to take the quick way and use violence. As the plot climaxes, Diana will have to use violence and Donna will go the reformation route.