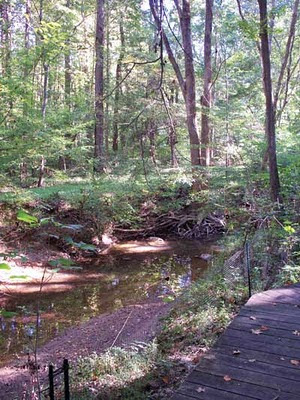 It's been a rough week. I've been on vacation—good thing! Because everything's been happening! But today was a little... well, something-er than the other days this week. Not quite sure yet, but it may be a positive "something."

It began with me figuring out when to get up. Y'see, yesterday the doc diagnosed Bran-Bran with liver disease and sent us home with a mountain of meds. Obi's got kidney and intestine problems, and yesterday we discovered that both cats had yeast infections in their ears.

So I was trying to figure out when to get up because Bran needs to get a pill BEFORE breakfast, by at the very least 5 minutes, in case he decides to throw it back up. But Bran's used to having breakfast as soon as my feet hit the rug beside the bed. He was outside this morning (which has been his usual place to be up to about a month ago), and trotted in. I grabbed him at the door, shoved a large pill down his gullet, and he took it as if this were an ordinary occurrence. Mind you, my hands stink because of all the chlorine due to the well project.

Bran and Obi let me toodle around the house for a few minutes before serving them breakfast. Breakfast is now sprinkled with their herpes med. Since they didn't eat their special food (low protein for Obi; high protein for Bran) last night, I used regular food packets, added to Obi's low-protein kibbles. After breakfast Bran gets his antibiotic and another kind of antibiotic. Obi gets a quarter heart pill. Both get treats.

I'd (barely) finished my State Fair painting yesterday, including a late-night varnish, and this morning proceeded to frame it. Then I packed for a plein air excursion to Cary, the first I've been able to put on my schedule with a painting group, since they only do this on Tuesday and Friday mornings. Tough for those with full-time jobs to attend.

I jumped in the shower and jumped out soon after. The water is quite hard now, difficult to get anything to suds up. "Hard" also as in you have to scrub at it to make it flow off you. The chlorine smell isn't gangbusters any more, and the water's no longer dark brown (except on occasion), but there was a sudden, permeating smell that sucked the oxygen out of me. I had to keep sticking my head out of the shower to breathe, and finally cut the conditioner short so I could escape.

Mind you, I know the dangers of combining chlorine and ammonia, but that makes an odorless gas and I hadn't been using ammonia anywhere. My elderly aunt once cleaned her bathroom with chlorox and ammonia, and her daughter found her in time to drag her out into the open air with minimal lung damage.

Don't know what this was. I've been running the hot water in there a couple times today hoping that'll take care of it. (Windows are open; fabulous day!)

Jumped in the car (late!!!), grabbed some snacks for later, and followed Mapquest directions to Cary's Hemlock Bluff Nature Preserve. Mapquest of course was wrong, but they were close. I scouted the location for a good place to set up, leaving my equipment behind. There were two painters at the top of the trail down to "Swift Creek," which was where I wanted to paint. We introduced ourselves and I continued on to see the creek. With the tropical storm recently past us I expected burbling liveliness.

Instead what I found was a long puddle. And that was after about 3000 STEEP steps down, down, down. I could never get my equipment down there, and if by some miracle I did, I'd definitely never get it up the bluff again. So I returned to the painters, we had a lovely chat as they were working on some very nice paintings, and then I proceeded on to the State Fairgrounds. 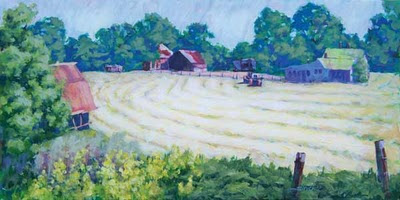 One of the nicest things about entering the State Fair art contest is that so many people behind the tables will complement your work. As a painter who lives alone, I rarely get any comments, much less good ones, so this was great. One lady said she always loved my paintings. Gee! Almost bought a sausage dog from a vendor on the way out (they're feeding the set-up folks), but that splurge will have to wait until next week and the actual fair.

Instead I stopped off at Briar Creek on the way home and, tired of the usual fast food in my home parts, got a Mediterranean lunch that was quite good. Topped it off with an Orange Julius. Haven't had one of those in years. It was watered down but still good.

But before that as long as I was at the fairgrounds, I zipped down the road to the NC Museum of Art to see their new, expanded digs. They look like airplane hangars. And the parking lot that was near the main entrance? It's now auxiliary parking, and the old, long-walk parking lot is the way to go. I'll remember next time.

The old building is under renovation now, so I only saw the new place. It's quite different on the inside: high ceilings and lots of walls for paintings. I wish I had those kind of walls. There's a Rodin gallery that leads out to a Rodin garden, I guess, with a long lily pond, bamboo plantings, and a handful of statues. Man, Rodin liked big hands and feet! The people looked like large Hobbits. And there was one lady all twisted around that was clearly pornographic. No joke. She was holding one leg up very awkwardly with the sole purpose of showing off her privates. Sheesh!

After all that excitement I got home and tried to take a nap, but due to all the walking/climbing done today (Ha! Daily exercise completed with bonus points!), my newly-diagnosed pinched nerve was acting up and I didn't want to take a pain pill in case I go out this afternoon. Which I will.

Because I've got to get some bags of dirt and fertilizer to replace the dug-up bushes and such around the patio. The entire thing won't be done, but I do want what's out of the ground back in, and the pots o' plants I've had sitting during the drought, waiting for better days, planted. But the patio cleaned my accounts out. Heck, just the vet bills would have done a job on my last paycheck. Did I really need the dirt? Yes!

Just checked the bank balance. Waitaminnit. That's wrong. That shows I have money. Surprise! We must have gotten a stock disbursement today; the amount and account were right for that. Whew. Bills can now be paid. A few bags of dirt can be bought. Thank you, universe!

For dinner both cats got just their prescriptive dinners. Both turned up their noses. Obi's was sprinkled with generic Metamucil and both got the herpes sprinkle again. Later on Obi will need to get his subcutaneous fluids injected, both will get ear drops, Obi will have another quarter heart pill, and then there are snackies and, "Good boy!"

So that brings us to the weekend, in a place where I thought I'd be for last weekend. I'll be dealing with the plants and (hopefully) finishing up a portrait. I was thinking about getting some plein air painting in tomorrow, but will see how work progresses and try to hit that Sunday morning. We're having beautiful, sunny weather and there is a little bit of color in the trees. It'd be a sin to waste that, even if I am lagging behind.

Today's plein air attempt may have been a bust, but it gave me a great idea about how to handle the remaining walkways in my yard. The nature preserve lined their walkways with 4x4s and filled in with bark mulch. I can do that, and it will cost less than 10% of what concrete would. Plus it'll be much more eco-friendly.

So what started off as a frantic, disappointing day has turned into an interesting adventure with some nice photos from my nature walk. It's been quite different from a normal day, and I even wind up in the black! Can't beat that.

Whoops, I forgot to give Bran his Clavamox. It's got to be given when he eats. If he turned up his nose at his prescription dinner, does that count? I'd give him some treats to fill his tummy, but am saving those for after the ear drops tonight. Decisions, decisions! (Later note: he threw up the Clavamox immediately.)

Ever have one of those days?
Posted by Carol A. Strickland at 4:29 PM