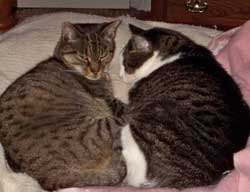 Bran and Obi (aka Branstookah and Obiwan) here, saying "hey, y'all!" to their Scottish cousins 645 times removed, Emmy and Millie, who reside at cutecatsisters.blogspot.com . Over there in Scotland it seems that blogs aren't friendly to Mac users and so this is the only way we can give you a holla! Or "Hola!" as the Amazon case may be.

Now let us return to our nap, please.

You never have to say you're sorry if you condense well

No new painting pic yet. I hope to give it its final or next-to-final session in an hour or so, while "Wait, Wait, Don't Tell Me" and its ilk are on the radio. That's prime paintin' time!

Last night I watched what I think is the funniest movie of all time or at least in the top three: What's Up, Doc? Belly-laughed all the way through. There's not a wasted line nor a missed sight gag in the whole thing. If you've never seen it, you need to. Just one thing to get one of the jokes: remember that Ryan O'Neal was the star of Love Story, one of the sappiest movies ever made. That idiot movie inundated American life for at least a year and we were forced to see "Love means you never have to say your sorry" posted everywhere as well as included in one of the world's sappiest songs ever. Bleah! But the movie -- Doc, that is -- was snappy every frame.

This past week I also watched two movies whose books I was quite familiar with. Last Sunday on free HBO it was The Golden Compass and then came The Spyderwick Chronicles at the Red Cross while I gave pheresis. Let me add that I'm also going to comment on Gone Wth the Wind and that now that I've italicized that title, I am going to leave out italics, which seem to be a pain here.

While oozing with gorgeous set decor and special effects and costume design, Compass came off rather disappointing. It was a Reader's Digest without the oomph. Watching it I felt I was missing something, though the script seemed merely to compress the book (and of course leave off the final three or so chapters). It went too fast imho, like having a waiter pass a tray of goodies by you but you can only admire what's on it, perhaps stick your finger on something to grab a quick taste of if you're quick... But you never have a chance to taste anything at any length, much less savor it. To do the book justice it really should have been an hour longer at least. But having been pointed at a kiddie audience, would that be so wise?

I remember being quite taken by all the to-do in Gone With the Wind, though some of the lines and their delivery made my eyes roll. Then I finally got around to reading the book, which was followed soon afterward quite coincidentally by another viewing. Whoa! I knew that the producer insisted that every line come from the book, but he had quite squashed things. Not so compressed as left things out, like all but one of Scarlet's kids for one (or would that be two?). And yet the book was there. Everything important was there, and there was no impression of having missed anything.

Spyderwick squashed the books down to much less than 2 hours. It changed characters, it left off great gluts of action, it missed the elves completely, and the whole griffin story was gone. But the main characters were there, and so was the gist of the story. The pacing was steady, the intent whole. This is how an edit is supposed to be.

This week I've been trying to finish up the final edit of the sequel to Touch of Danger, Star-Crossed. Taking major cues from my own common sense and that of my now-defunct crit group, I've been re-reading and making notes on where I can hack. I do love to put in all the "process." And Star- was the set-up section of the series.

When I first sat down to write Three Worlds it came out as a mammoth novel, longer than any Harry Potter or Wheel of Time book. It had to be split into 4 novels. If you picture the classic "W" plot, Vol. 1 is the leg down to the first turning point (they fall in love). Vol. 2 is the rising action where, in a normal book, you put your back story and establish characters and such. That's what I did. But in a stand-alone book you can't do that unless you're an anal-retentive author. (Looks around innocently and whistles.)

So I'm trying to dig all that out, either permanently or by assigning it to future sequels, and keep a pace going that is snappy and reader-friendly.

But I see after viewing these movies that I'll have to cut some more. Maybe a lot more. Which will require another re-read. Which means that the book won't be ready this week.

Notes for the week: Obama's inaugural speech (was that really this week?) was faboo. Let's hope his administration lives by its words.

I only heard one reporter (Katie Couric) comment that Joe Biden was technically president for a few minutes last Tuesday, as the ceremony was running late and Mr. Bush's term was over at noon. Everyone flung themselves on the "they mixed up a word in the oath!!!!" thing (minor point imho with zero illegality) but something like this? Not another word.

Kay Yow died yesterday. I was hoping she was merely in the hospital to get over the lack of energy she'd been citing as to why she couldn't attend games. My condolences to her extended family and friends. Many have been inspired by her strength.


Posted by Carol A. Strickland at 7:29 AM No comments: 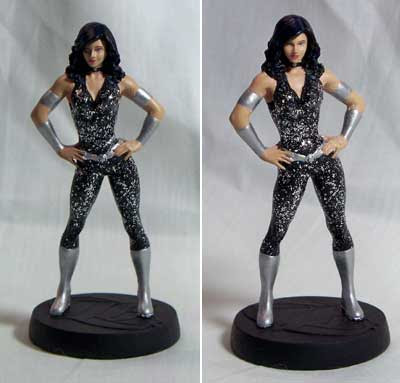 Finished! The jar of glitter at Wal-Mart had far, far too large pieces to use on this. I wondered if the party supplies section would have any baubles I could scrape tiny glitter off of, when I saw... GLITTER GLUE! Glue and tee-tiny glitter combined!

Okay, so the glue is glossy, but the effect was so pretty! I'd already speckled the costume with tiny white stars (even considered no glitter because it was really nice), and now was going to put the glitter in a spiral a la Donna's original red longjohns, but as soon as the first blop went on -- had to have it all over.

I took two shots in an attempt to show the glitter effect under the lights. In person it's spectacular! And I darkened Donna's lipstick a tad. Was going to try to add a little eyeliner, but my hands aren't that steady and I didn't want blobs of black over her eyes.

PS: Snow day! TV doesn't know whether to show snow reports or the inauguration events. Looks like a little over 2 inches out there, and it's still coming down hard. Whoopie!

Finishing what you start 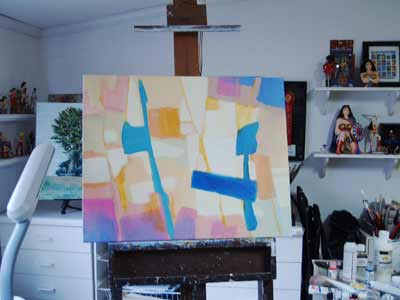 Okay, we've got our New Year's goals. (And if you were like me you didn't get around to writing them down until this week!) Suddenly that slew of stuff you had to do has settled into a more calm organized form that actually seems workable... that is, if you assigned a due date for each (and of course the steps that have to be taken before you say things are finished).

It took me some time to finish my last painting. I was stymied. I'd followed Bob Burridge's general instructions and was doing a picture primarily in yellows. I'd gone from cruciform layout to symbol layout but the painting still sat there. Finally I recalled my blog on doing value sketches, shouted, "DUH!" and did one. 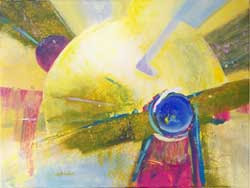 All at once the painting was Saturn. I finished quickly. Ah, organization!

As I've said before (I hope) I'm trying to learn (1) abstracts and (2) acrylics this winter. So I started another painting, the one that should be at the top of this column. Oh, I began with the vertical striping that Bob Burridge had shown in his classes and videos. Then I received Bob Rankin's DVD and was reminded of what I'd learned when I took his class. Now I started developing areas of color. Uh... well... It just sorta sat there.

And then I shouted, "DUH!" and did my value sketch. Now it's going somewhere. I show it to you now before its final painting session (which may turn into 2, to allow for one layer to dry well), just in case you were interested. You can also see a bit of the studio behind it. And may I add: my tabouret is not usually that piled with junk. I'd just cleared off my drawing table.
On which stands this: 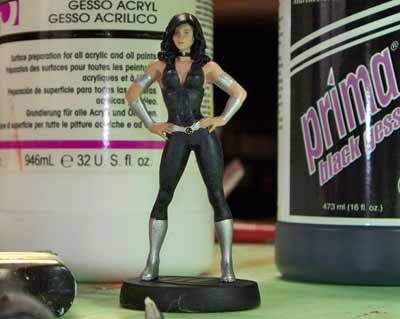 Is Donna Troy not beautiful? This is a 4" lead statue that came with a tabloid-sized "Who is Donna Troy?" (HAH!) booklet. My wonderful, adorable, generous friend Mart sent it to me all the way from Scotland!

And of course just because it's Donna the statue has to be perfect. So I'm going to dab on some black gesso so her cleavage is a little more bearable, add the Starboy starfield to the outfit with white dots (is that why I retired my toothbrush last week? Should be fun to spritz it on!) and will go out on Monday to buy some silver glitter, of which just a few bits will make it to this outfit. I'm thinking of doing them in a subtle pattern against the white starfield a la the pattern that Nick Cardy did on Donna's original red longjohn costume. Ah, anal retentitiveness!

It's easy enough to begin a project. Just ask any writer or artist. Or anyone. It's finishing that's the big accomplishment. And of course, it's the journey along the way that is life and learning -- the very marrow of our existence. Oh my, did I say that? Well, it's the IMPORTANT stuff.

Now let's hope that all these visuals are placed properly. Sigh. Technology...