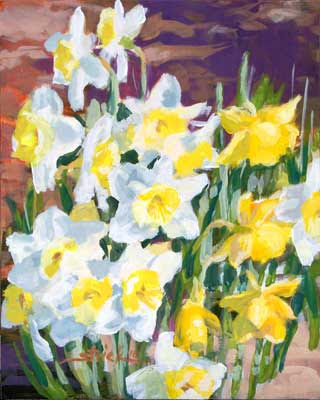 Next month I'll be attending the annual Local Color Plein Air Painting competition in Raleigh. Always before I've trotted over and worked, usually in sheer terror, on my first plein air painting of the year. This year I've decided that I'm going to do a plein air painting each weekend until then so I'm in fightin' form! Watch out, world!

Plein air is a hoot. If I didn't beat myself up each time, I'd really enjoy it. You're getting out into the world, looking at how colors really are and what things truly look like out there, like trees. Did you know that the Impressionists, many of whom got their inspiration/techniques from working en plein air, could only do so because paint in tubes had just started to be available?

Competitions are another level of terror entirely. For Local Color, we've got to check in around 9 AM, get our canvases stamped so we can't cheat and bring in some masterpiece from our studio, and then report back by 4 or so with a framed painting. No pressure! Not even bladder pressure once you've been out standing for three hours or so, sipping from a bucket of iced tea as the temperature climbs and the shadows move.

Anyway, to relieve part of that pressure, I'm practicing. This is the first one, and one of my first attempts at flowers (which are on my list of things to learn this year). These daffs are blooming next to the bottom of the steps leading to my front door. So handy for the first time out! I can just run into the house and grab whatever I've forgotten. "Oh right, bug spray!"

These daffs are so cheery, just the right thing after such a long and snowy winter. I hope you enjoy them! 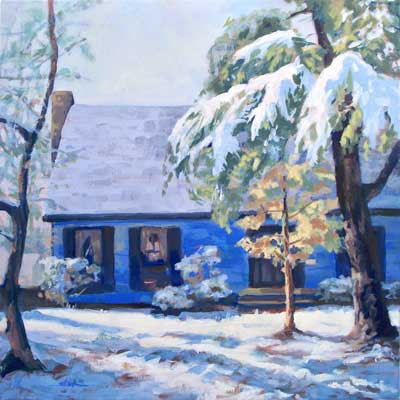 I LOVED this blue house! Especially on the rare occasions when Hillsborough got snow. Why did I state that in past tense? Because the owners recently painted it to a crisp, modern shade of beige that, though it looks very nice, takes away all the cottage-y goodness that the blue held.

I was late to work one day last year because I stopped to take shots of the house and its huge, uncommon pines (or are they cedars?) with their load of snow. When this winter we got all the snow, I stayed inside and began this painting to celebrate.

I took it to an art class and the instructor there (a pretty famous guy) told me to take the dormer off. I liked that dormer! So the painting sat and sat in the studio as I'd go in and meditate on it, first with a finger blocking the dormer, then showing it.

I hate to say it, but the guy was right. The picture has more punch without the dormer, so I painted it out. Ahh, so much better!

It's 20x20", acrylic, painted on a stretched canvas. All materials are archival and shipping is included in the cost.

Posted by Carol A. Strickland at 8:48 AM No comments: 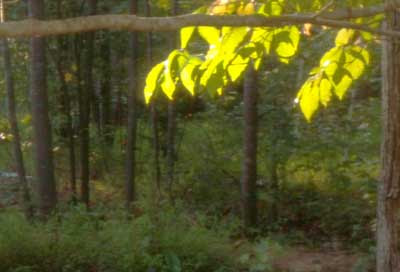 Someone please tell me it's not too late to start!
Posted by Carol A. Strickland at 9:22 AM No comments:

Gail has left the building 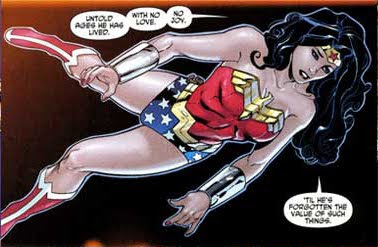 Gail Simone's run on Wonder Woman has been a milestone, one that I'm sure future writers will steer by.

I'd been wondering when this announcement would come. First Gail pulled back from hinting at future stories, and then about a month ago she phrased a post concerning her run in the past tense, and I knew for sure it was over.

Gail has invigorated Wonder Woman, has given Wondie enough PR to make other pros stand up and look this way, wondering what the big hubbub was about. I believe it has made many reconsider who they think Wonder Woman is and what she is capable of.

I may not have agreed with some of the GS additions to the mythos, but I've certainly enjoyed others enormously. I may have wondered at how some storylines played out, but others were a hoot and a half, those kinds of tales that come around once every decade or so and make WW worthy of a lifetime of fandom. The energy of this era has crackled!

I feel that whoever succeeds Gail will be following in her footsteps. I hope they'll find the Wondieverse has been opened again to allow magical flights of imagination and inspiration combined.

I lift my cup of chai to Gail to thank her for all her WW work both in the comic and in her PR efforts, and to wish her the best in her future endeavors!
Posted by Carol A. Strickland at 9:18 PM 3 comments:

It's good to be a woman 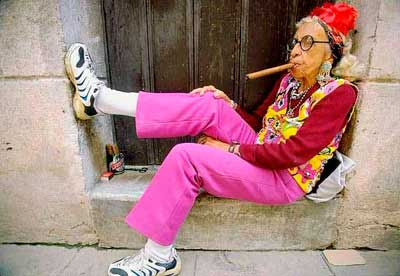 Had to post this. Just got it via chain email, but it might be from Savvy Magazine:

It is good to be a woman!

1. We got off the Titanic first.
2. We can scare male bosses with the mysterious gynecological disorder excuses.
3. Taxis stop for us.
4. We don't look like a frog in a blender when dancing.
5. No fashion faux pas we make could ever rival the Speedo.
6. We don't have to pass gas to amuse ourselves.
7. If we forget to shave, no one has to know.
8. We can congratulate our teammate without ever touching her rear end.
9. We never have to reach down every so often to make sure our privates are still there.
10. We have the ability to dress ourselves.
11.  We can talk to the opposite sex without having to picture them naked.
12.  If we marry someone 20 years younger, we are aware that we will look like an idiot.
13. We will never regret piercing our ears.
14. There are times when chocolate really can solve all your problems.
15. We can make comments about how silly men are in their presence because they aren't listening anyway.
Posted by Carol A. Strickland at 8:47 AM No comments: