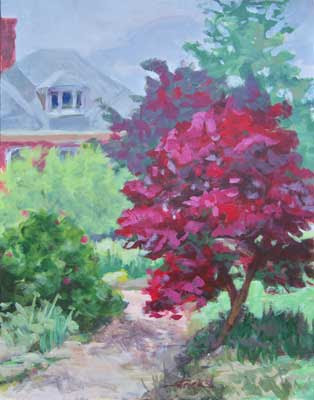 Whew! All done, and I want to put my feet up and not think about anything until tomorrow. At least!

Every year Local Color Gallery in Raleigh has a Plein Air Paint Out. They give us a map of where we're supposed to paint, and we show up. You have to get your canvases stamped at the beginning of the day so they know you didn't cheat, and then you have to report back with finished painting framed and ready to hang. The paintings go in a show for a month at the gallery, and selected ones go to another show later.

It gets people out n about. Folks will stroll up and ask why everyone's out painting? Usually the weather's great, except for that one year when a bunch of us were painting along Glenwood Avenue and the wind was howling down the street like we were in a wind tunnel. I kept having to run after the woman beside me's canvas to catch it while she was off getting lunch.

Early forecasts had said rain, but by Friday night they said partly cloudy, no chance of precip. So this morning I checked just in case to see if Local Color had instructed folks as to a rain day, but there was no negative word from them. I went out back to see if I truly had murdered one of my grape vines the other day. Hooray! It was coming back to life! The sky was gorgeously blue; the air was still. I crammed half my studio into the car and took off.

This was my first real plein air painting foray with acrylics, so I wasn't quite sure if I'd brought everything I needed. It'd be a heck of a thing if I set up and discovered that, say, I'd forgotten a tube of white paint!

As I drove into Raleigh, a bank of black clouds followed me. Uh oh.

I checked in and then started driving around. We'd painted Brooklyn a few years before and (1) I'd hated the painting I'd done then, and (2) I wanted to get away from that block. It had nothing to do with me having lived there for a while about 25 years previously. Today I wanted to do a landscape with no buildings, and I'd been overjoyed to discover that at the last minute the gallery had decided we could paint in Fred Fletcher Park. I'd never been there. (When I lived in the area, it was private property belonging to a children's home.)

So I drove around, then got out and walked some very pretty pathways. There was a GINORMOUS pink azalea that was screaming to be painted, but it was next to garbage cans and little else. I spotted two other painters already going to town on their paintings, and then saw what I thought was a sweet, inviting little scene.

I set up, did my value sketch—this would be my primary focus, along with shapes—and started in. My one and only set of visitors arrived then, just as I was scumbling in some color on the primary tree, with nothing else on the canvas. They said something polite and left.

One of the event's people came around to take pictures. Then a few minutes later another came through, checking on folks' locations. She assured me that they had a squad of high schoolers who would guard our stuff so we could take a bathroom break. They'd be by in a few minutes. I asked her what time it was. She said about 11:30, and we noticed that one painter across from me had left. He'd had some job he had to go to in the afternoon. I felt sorry that he could only put in two hours' time to the event. (Check in started at 9 AM.)

I refused to acknowledge it. "Say, that's not bad," I told myself about the painting. I came back and did some extreme value adjustments that normally would have had me shrieking, but the overall effect wasn't all that terrible. Good enough. I'd probably be in need of a bathroom soon (the ultimate "the painting is done" signal), so I reached for my liner brush to sign my name.

No liner brush. I had to scrawl a reasonable facsimile of my name in the corner with a quarter-inch brush, packed up, and left.

Just wait until I get this painting back. One or two hours in my studio and it will look fabulous. It's got good bones.

It only took about forty minutes (or so it seemed) cruising to find a parking spot to deliver the painting. I parked in an illegal space in the gallery's lot because there wasn't any place else. Went inside, wrenched the metal tabs out of the frame I'd brought, plunked the painting in, grabbed my point driver—WHAM WHAM WHAM WHAM—and handed the painting in.

This was the first time handling the Paint Out for the two ladies/girls at the desk. "Should we be getting prices?" they asked each other.

"Two hundred dollars," I told them. I'd done the math in my head on the way over and didn't increase anything because the gallery's going to take a 30% cut from any sales. Your price is your price, as all the ad marketing people say. The girls knew enough to get the location of the picture, but didn't take down the picture's title. Good thing, because it doesn't have one yet.

I strolled into the back to see what other paintings had been handed in. There I saw the same building as I'd caught, but from a more distant view. It had to have been from the guy who left early.

The painting was jaw-droppingly spectacular.

He did that in just 2 hours? Holy moley! I should have checked it to see if Barry Allen had signed the work. (Make that Wally West for you youngsters.)

The other four that had been turned in were gorgeous as well. I strove to recall the words of the Desiderata: "If you compare yourself with others, you may become vain or bitter, for always there will be greater and lesser persons than yourself." Okay, I can dig it. Some day I'll have as much experience as those folks have. Maybe I'll be as good as they are. Who knows, maybe my style will be the same as theirs, and maybe it will have taken off in a completely different direction. Whatever. The more boats in the harbor, and all that.

As I was leaving, one of the high school students was just beginning his rounds to see if anyone out there needed a bathroom break. At that point we were 4 1/2 hours into the event.

The only thing left was to grab some food on the way home, unpack when I got there, and put my feet up!

Next year I shall strive to enjoy the painting process as well as the beauty of my subject, instead of so fiercely concentrating on (1) finishing, (2) being able to recognize what I was painting, and (3) value.
Posted by Carol A. Strickland at 5:30 PM 2 comments: 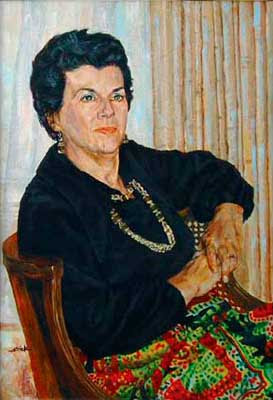 You wouldn't know it to look at me, my website, or my house, but things are finally starting to get done.

I've finally managed to put up the contest to WIN A FREE PAINTED PORTRAIT on my website! You can find it by typing in my brand-new url, www.RealPaintedPortraits.com and checking out the easy rules. (Just sign into my guestbook.)

Sure, the rest of the art website isn't up but it will be by the end of the week. It finally occurred to me that I didn't have to do the entire thing at one swoop, but could do it one page at a time. Lightbulb moment!

My wip is coming along. As soon as I get the art site done I can switch priorities back to it. Still hoping to have the first draft done by the end of the month.

Got the next installment of "Star-Spangled Panties" out the door.

Clearing out the house is proceeding at a slow but steady pace. Thanks, eBay! And Craigslist, too. (But I'm still waiting for someone to come get that 20x10' freestanding mural from my backyard.)

Taxes (gulp) took an unexpected chunk o' money from my New Patio Fund, but I'll get the final $$ somehow, and am determined not to dip into ye Emergency Savings... much.

Every now and then I have time to pet the kitties. It's been helpful that I've been able to give Obi his sub-cutaneous fluids myself. Well, pretty much of 'em. This means we don't have to spend 1+ hours ferrying him back and forth to the vets twice a week. Since he has a conniption every time he gets into his travel box, plus every time he has to face the vet, that saves wear and tear on his nervous/heart system as well.

Why, I might even begin to have a little time to devote to ME! Won't that be a hoot?

Anyway, I hope you'll come by and sign my guestbook to get on my mailing list, I mean, to enter the free portrait contest. No purchase necessary and all that!
Posted by Carol A. Strickland at 9:12 AM No comments: