It's called Sturgeon's Law: 90% of everything is crap.

I took 3 days off last week, resulting in a 5-day mini-vacation in which I've gotten a surprising amount of work done in just about every area of my life, meaning that it's difficult to see any changes because there's so much to do in so many different places. But during my rest breaks I have managed to read 3 books. (Okay, the last one hasn't been finished yet.)

The first book turned out to be erotica. Why can't publishers post erotica ratings so as to warn readers who only want so much and no more? You won't be able to tell what book this is because it resembles so many others, but it was recommended as summer reading by a major publication, as were all 3 books discussed here.

The book begins as Our Heroine dresses stupidly (the obvious reason so she can shed her clothes more quickly) and goes off on a stupid trip to a forbidden, isolated midnight place she hasn't been to in years, a place obviously reeking with danger. There she stumbles across Our Hero, who says, "It's you," for they'd known of each other only by reputation in high school. To which Our Heroine says, "You!"

He was the school Bad Boy and she was the Good Girl, daughter of a cop or preacher or politician with high standing in the community. So of course she throws all that background to the wind and without further ado, they Go At It. Of course he makes sure she is pleasured first before he achieves his own (this is romance fiction after all), but it's the best, hottest sex either one has ever, ever had. They go their separate ways after angry post-coital words are exchanged. Well, at least they've started to talk to each other now.

This is within the first 10 pages of the book. Our Heroine quickly returns home and does five Incredibly Stupid Things that will lead her back into the arms of Our Bad Boy Hero. At this point I put down the book, make a note of the author's name, and determine never to buy anything from her again.

This kind of unfeeling, completely unromantic romance seems to be what sells the best. Why is that? It makes me feel dirty instead of excited when I read it. Besides, it requires stupid heroes/heroines, and I DESPISE reading about stupid people doing stupid things.

Book #2 had promise. At first I thought it was something that I'd helped shape the query synopsis for in our local group, but the author's name wasn't familiar. After a while, the plot diverged from that other one and I was intrigued, wondering where this would go.

But it was formulaic. I'll give it points in that it plunked one extra layer onto Our Heroine, but everyone else in the top tier of characters was by the book. The author must have realized that because she added over a dozen others to the secondary and tertiary tiers, all part of the big family (another hallmark of too much romance fiction, usually to allow for sequels that involve the other members being brought up to primary status for their own books). The trouble was, they were all alike and I had no idea who was who, what differentiated them from each other. They all had the same relationship problems, all had characters with no depth at all, and all spoke in interchangeable pseudo-psychologist patter. The climax to the plot was dealt with quickly (and questionably, as in huh? How did that happen?) in order to wrap things up for everyone and deliver a HEA without going over the publisher's required page count.

Formula. I realize that there is a basic structure of romance fiction, but must it be simplified so much? Where's the zing in reading a plot that we've read a hundred times, be it set in contemporary, historic, fantasy or sf setting? Yawwwwn. Next time, put a little thought into it, please.

With two books down I reached for my third, done by an author who rarely disappoints. Why is this? She may follow the basic fiction tell-a-story structure, but she's brought to the table an interesting and clashing mix of unique characters who come from unique situations, who reveal new layers of themselves as the plot continues. Almost every chapter brings a surprise of some kind, a twist that makes the characters work to sort themselves out while learning more about themselves.

The story bounds forward with zest. Sexual elements are gradually folded in, and when they arrive they come with humor, disappointment, a possibility of things getting better in the future... a sense of reality that fiction does so well in giving us in its own unrealistic way. Haven't finished the book yet, but if it's like her others, the sex scenes will occur only after the characters start to relate to each other in ways that frighten them and force them to deal with their own innermost secrets. When that final sex scene comes they'll be interlinked not only in body but in mind and purpose. And it'll finally be the best sex they've ever had because they're with the best person for them. I know I'll need a Kleenex to get through the end of this, and I know that I'll remember the characters long after I finish.

Hooray for the 10 percent!
Posted by Carol A. Strickland at 9:41 AM No comments:

A Wolverine State of Mind 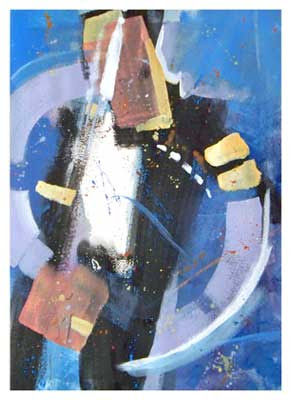 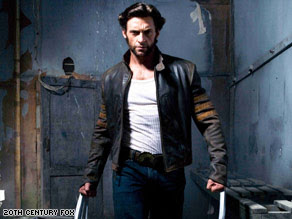 Took a vacation day today to edit wip, and so far I haven't done it. However, I have weeded a bit, readed a bit, and painted. Finally got to work on that Wolverine abstract I wanted to do. It's not bad, but I think I'll try another to get it just right.
Posted by Carol A. Strickland at 3:40 PM No comments: 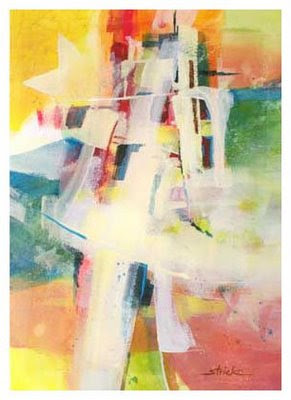 Can't believe it's been so long since I posted. I sit at work thinking about everything that's happened and come up with fairly decent blog ideas, but where are the blogs?

Since the last blog I had the sequel to Touch of Danger turned down by Cerridwen. Bummer! But people gave me names of publishers who have put out sequels to books that were published by other companies. So I sent it to Samhain. Hope to hear positively from them within 3 months.

The day after the rejection I got my first official-type review from "Lanta" at "The Romance Studio." Five out of five hearts; highly recommended! Woo hoo! Since I don't have any sales figures yet for ToD, I could add that to my query letter to Samhain.

Currently I've dusted off an ancient manuscript (one that won Honorable Mention in the 2002 Heart of the Rockies contest), a historical romance, and am editing it to be sent to Cerridwen. Hopefully (since work should be slow this week) I'll have that done by next Monday.

Bought and watched the latest Joe DiGuilio DVD (as opposed to his free videos which are available at Jerry's Artarama) and determined that I would paint an abstract, by golly. On watercolor paper. Seemed to me that I had some wc pads in the corner of the studio, and I did. They're only 140 lb, though; I should get some 300 lb at Art of the Carolinas this November. But it worked well enough (see above), and I'm pretty pleased.

I was trying to work with colors from my plein air painting which is STILL waiting for me to finish it, in order to explore a more simplified palette. I think this worked well. About 3/4 of the way through the big spangle just refused NOT to be painted, so I had to include 2 more to balance it. It's the Wonder Woman fan in me, I suppose, plus all the red, white & blue. When I turned it on its side and found the best aspect for it, the swashes turned into the letter "A." Oh no, it's Captain America!

Instead I named it "Born on the Fourth of July." The date's close enough. Hope you enjoy it. It's 15x21" and acrylics. Wonder if anyone on eBay might be interested? Hm...
Posted by Carol A. Strickland at 1:27 PM 3 comments: