A plea for romance writers... or any writers, for that matter 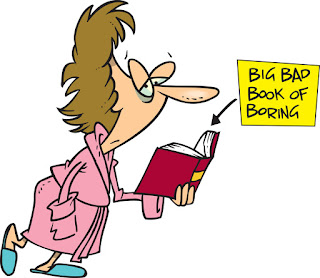 I've been reading for a while now. A few decades or more, in fact. Lately, especially with the rise of self-publishing (although the Big Five produce books of the same quality), I've discovered that many books are being published before they're ready.

Take this one I'm currently going through, a novel I promised I'd review for Amazon. It's an FF&P romance. Like all too many FF&P romances I've read, it lacks, well, FF&P (fantasy, futuristic & paranormal) as well as romance.

By "lacking FF&P" I mean that the world-building stinks. In this, the author has come up with an alien civilization that is, for all intents and purposes, that of Earth with the addition of a few ray guns and cool ships. People on this other world even speak English, eat Earth food, tell their time by Terran standards, etc. etc. No imagination required!

By "lacking romance," I mean that the h/h may exchange long gazes and shivers may run up the heroine's spine when she thinks of the hero, but that's it. There's no reason for it. In this book they had sex—the blandest sex scene I've ever read. There's no emotion, no sensual clues... Just tab A into slot B, and really, not much of that. (Thank goodness.) I think this book handled it in one paragraph, but that paragraph is supposed to form the basis for the entire novel.

In this case also, being an FF&P book, there's psi involved. The h/h touch and—ZAPPO!—instant bonding. Now, I used this in my book as well. In the Three Worlds series, Londo and Lina both have psychic gifts, but I set up reasons why they should be attracted to each other, gave them a few times to tease and touch and test and share some intimate revelations before ZAPPO! took place. After that, I reinforced it.

But all too many FF&P books use this Instant Zappo as the basis for the entire relationship. They are soul mates, or fated to be mated, or their pheromones combine in just the right mix, or an ancient prophecy has declared that... FF&P is the worst offender, but other genres also manage this without using psi.

Let me digress. I love "classic" Wonder Woman, by which I mean the WW who stood for striving for peace, helping the disenfranchised, etc. etc. But she also had abilities due to Amazon Training. When I was a kid reading the adventures of Wonder Girl, she always talked about how she had to go off and practice her Amazon Training. She didn't just appear one day, fully powered, without doing anything to deserve those powers.

One of the big things I disliked about the post-Crisis Wonder Woman was that she received her powers on a silver platter. Never had to do a thing to have them. Bleah!

And take the new Star Trek. (Please!) Jim Kirk gets to be a big-shot captain because he's got machismo. Big balls. He bluffs his way to the top and gets things done in some way I can't really understand. Sparkly explosions and flares distract me from wondering why.

Contrast and compare to Classic Jim Kirk, who had to study hard all his life and make it to the top of his class through work and yes, big balls. He knew every last circuit in the Enterprise, and learned how to deal with alien races. New Kirk has not learned any of that. How does he do his job? He certainly hasn't done his job of making me want to see new ST movies.

So writers: I want you to add a few more layers to these books before you send them off. Figure out who your characters are. I'm tired of seeing gorgeous, rich, powerful guys as the hero and gorgeous women as the heroine, both of whom have no depth to them. Looks and money aren't enough for me. Give me some oomph! Make them work to be who and where they are!

If the h/h get together and it's love at first sight, have them both revel in it. Let me FEEL it. If their relationship starts small and builds, let me delight in that. Show me the steps it takes to create a Romance for the Ages.

Margie Lawson has a workshop that has writers using colored highlighters to make sure they utilize setting, emotions, physical responses, sharp dialogue, and plot. Use all your colors, authors. PLEASE. I'm begging you.

If you can't spare the time to do so, please include one word into the description you use to sell your book: "bland." That way I will steer far from it and save money. Thanks!

Have you read any books like this? What's your impression of them? Do you like your characters to be multi-layered? How "way out" do you like your fantasy/sci fi?

Posted by Carol A. Strickland at 11:24 AM No comments:

A few months ago, we read Carol Bowman's Children's Past Lives: How Past Life Memories Affect Your Child. Really good book! (I reviewed it here.) In it she discussed the mounds of evidence about kids having legitimate past-life memories, but her approach was different. She examined this from a "how does it affect the child?" point of view, with the hopes of easing any trauma the child might experience. 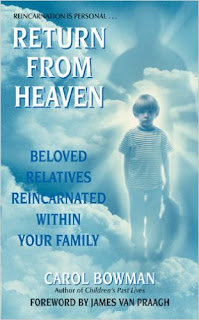 I had to get the follow-up, Return from Heaven: Beloved Relatives Reincarnated Within Your Family, which was written in 2001, about ten years after the first book. A good number of the cases she'd been studying had been starting to show a pattern in which someone would reincarnate into the same family. Grandfather would be the new grandchild, that kind of thing.

Why should someone want to come back with the same people around? Turns out that people can want to make things right between themselves and another person. Or there's the simple fact that they love that other person and want to continue to live with them.

There's one instance in the book concerning twins. They were being carried by Mother A. One of the twins decided that no, he wanted B (the brother of Father A) as the father, not A, though the other twin most definitely wanted Father A. But the twin was insistent; their cord wrapped around their necks in utero, and they were miscarried. Mother A, of course, was devastated.

Seven or so years pass, and now Father B is married. His kids turn out to be the twins (twins no longer, but born a couple years apart). The older yells often at the younger about how he wanted Father A to be his daddy. This upsets the B couple, of course.

Over time they realize that their boys are the twins reincarnated. The older boy admits that he truly loves Father B, and makes up with his younger brother. They love being around their cousins and aunt and uncle, though. Eventually Parents B gingerly tell Mother A that these are her twins, returned.

She's ecstatic! She hasn't lost her boys after all, but can still enjoy them in the close unit that these two families share.

Pretty cool stuff. There's also a couple of chapters where Carol talks about and meets Dr. Ian Stevenson, who worked for so many decades gathering evidence about past-life experiences seen through the eyes of children. (FYI, Dr. Stevenson died in 2007.) After meeting with one of her case families, he discussed with her possible reasons for coming back in such a situation, after she'd tried to puzzle it all out. His theory: "Isn't love reason enough?"

Lovely. I see that Dr. Stevenson's successor has also written at least one book on this subject. I'll be checking that out. 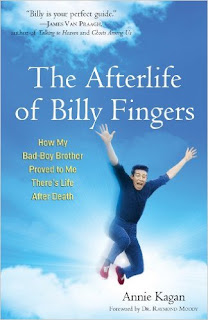 Last month our book was another quick read, but this one caused tears to stream down my face at some points. (How embarrassing when you're sitting in the doctor's waiting room!) It's pretty darned amazing: The Afterlife of Billy Fingers: How My Bad-Boy Brother Proved to Me There's Life After Death, by Annie Kagan.

Billy Kagan was in his sixties, homeless in Miami. He'd often been a drug addict, sometimes involved with the underworld (hence him using the "Billy Fingers" alias so they wouldn't know his true name), and sometimes he walked the straight and narrow. One day he ran out in front of a car and was killed.

His sister, Annie, about twenty years younger than he, pretty much went into a fetal position when she got the news. They'd had a rough relationship, but she loved him and she knew he loved her. She lay in bed for days… until she clearly heard Billy's voice next to her.

I've read a lot of Near-Death Experience recollections, and Pre-Life Hypnotic Regressions. There are more and more fascinating books documentating these things appearing all the time. But Billy didn't come back. He went on farther than any NDE. Those people who reincarnated? Billy had reached the end of his reincarnation cycle. He went on from there. Gleefully. Having the time of his afterlife.

He grew and grew in knowledge, delighting in merging with the universe and then telling his sister about it. Then came a time when a being we might call a goddess performed a ceremony recognizing the end of his reincarnations. After that came the day when he loosed his soul, cast it off as he'd cast off his body when he'd died. He became all and nothing.

Pretty heavy stuff! And it's beautiful. My only gripe is that there wasn't an extra chapter with corroborating testimony from the people who were in on at least a part of this, like Annie's good friend, Tex.

Billy leaves us with some lessons. There is no right or wrong. Yes, he was an addict. He wanted to understand addicts, plus he wanted to be more in tune with the universe. This was his final life, and he made sure he had a terrific time during as much of it as he could.

He says that Martin Luther King and Mahatma Gandhi were members of the Great White Brotherhood/White Light Brothers (the "white" is the color of the light, and "brotherhood" encompasses both genders), really, really big figures in the afterlife. Yet I know that neither of them were near perfect. "Most of the White Light Brothers never go to earth, but their absolute light intermingles with and protects your world. If you focus on the white light, as you do my voice, I know you'll feel it… You see, the Brothers aren't souls. They are pure Spirit. Just as our bodies are the carriers of our souls, our souls are the carriers of our Spirit."

"I was an incurable drug addict who wasn't even capable of making a living," Billy says. "Who would have thought that I would be ready for becoming the Universe? Well, that just shows that you can never judge anyone's life, yours included."

"Make your life as interesting as you can," he counsels. "Take chances. Go after your dreams." And: "People spend lots of time on things that make them unhappy—too much focus on the sand in the oyster. To cultivate joy, pay attention to what you like." He means every day. Every moment that you can. Focus on what delights you.

"I took on form to enter time. I entered time to partake in creation."

This is a book I'll likely reread a number of times. It's that good; it's that much to think about.

Posted by Carol A. Strickland at 7:47 PM No comments: