Sand in my shoes (and ears) (and camera) 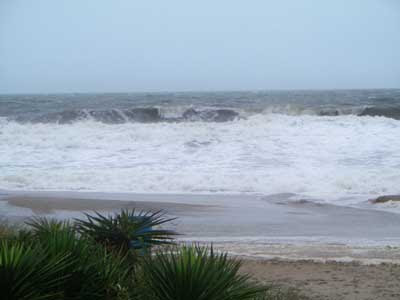 Cross Wilmington, NC off my list of possible retirement spots. The place is pretty great, but the shore ain't got no rocks.

Imho, a fabulous shoreline includes rocks and maybe some cliffs outlining a bay. Wilmington? One tour guide said that the only rocks in the city have come from ships' ballasts that were dumped in the Cape Fear River and retrieved via lots of mule labor.

I told myself I was going out to Wrightsville Beach for a few days just to relax. I managed that but I also managed to take about 275 photos, hoping to get the basis for a number of paintings. The forecast looked semi-okay, with sun the first day, partially cloudy (10% chance of rain) the second, and storms starting somewhere around late morning of the third day, when I'd be heading back home. I found myself gathering the hood of my raincoat closer as I marched through that drippy "10%" most of day #2. As I was packing the car to go home, I had to hang on to it in fear of being blown away by what wasn't quite a tropical depression passing through.

I was looking for quaint fishing boats lolling about, moored picturesquely against an ancient dock. Didn't see any of those, though I saw a lot of modern white yachts hiked up above the waterline in various marinas.

Still, I got lots of textural stuff that looks great on film (and hopefully, canvas). I want to do a series of abstracted sea foam patterns. That should look good on America's living room walls! I also got some lovely wave shots, as the surf crashed HARD even before the storm appeared. My hotel, the Blockade Runner, was located about a mile from the famous Johnny Mercer Pier. The morning news said that usually the surf breaks at the end of the pier. Yesterday it was breaking halfway up and by this morning's high tide, it was breaking almost at the land end! 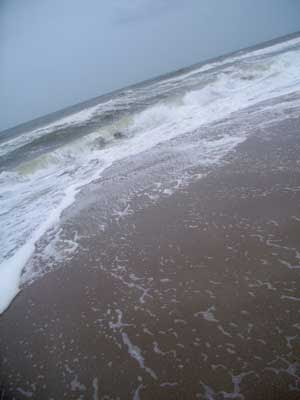 This is for Mart, whose Facebook shots are always at a Batman-esque angle. Must be something about the gravity over there in Scotland...

Halfway down to the pier I determined that that "krkk, krsh" sound I could faintly hear above the roaring surf and wind was my camera lens extending. Sand must have gotten into it. The next day, shooting pictures in the rain, the sound went away. Whew!

The day before I left for vacation, our writers' group had had an all-day workshop, followed by a booksigning (I sold 3 books!!!). As I chowed down afterward on a little more Mexican than I usually order at dinner, I excused myself by saying it was okay; I'd walk ten miles the next day. I didn't know I wasn't lying!!! 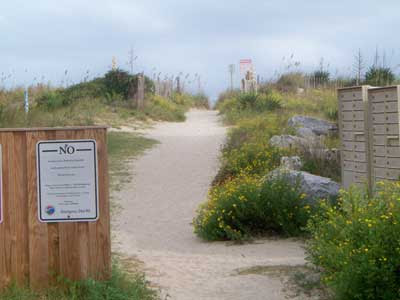 Well, it seemed like 10 miles. As soon as I hit the hotel I was on the beach walking and taking pictures. I walked down to the pier (which was actually one mile. One mile times deep, soft sand equals... what?) By the time I got back to the hotel I ditched plans to walk to the Oceanic. That's the Oceanic in the picture below. (Taken from my hotel.) Look where the clouds seem to be pointing, that distant gray building on a pier you probably can't see. That's the Oceanic. It's a block from where highway 74 (or was it 76?) comes to an abrupt halt behind some houses. Deeeeelicious food! Lovely wait-staff. I had grilled salmon. The atmosphere there is fabulous, and the wrap-around windows were crusted with sea-salt but still held a beautiful view. 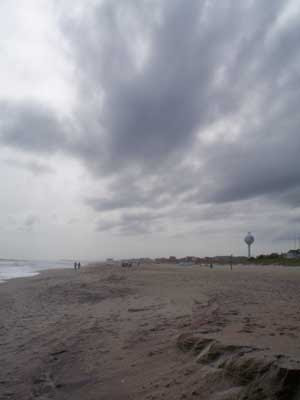 The days were warm, and the first one was sunny. Lots of folks on the beach. I'm happy to report that I saw dozens of fathers playing with their kids. No deadbeat dads here! One helped his son with a colorful kite. They finally got it to stay up a while, but the winds were fierce and it kept crashing.

A group of three guys in swimsuits trotted out. One threw himself face-down in the sand, and the other two took off for the surf. They were back within 5 minutes. I spotted two wannabe surfers. One actually got up on his board for a moment, but both came in quickly. There was a young woman who was lying face-down on her blanket in the sun, fully clothed. Not sure what kind of tan she was expecting.

There was no way I could come to the beach and NOT put at least a toe in the water, so that's what I did. I waded out, toe-deep, and took some great texture shots of the surf. How surprising that just the final, tiny edges of the waves as they wore themselves out, had enough force in them to make me struggle for my balance as they swept back out! If it was that bad with just the sea-foam, imagine what the actual breakers must be like!

After a night of trying to sleep on the Blockade Runner's miserable excuse for a bed, I took off for downtown and a horse-drawn tour. Our guide said that Wilmington has more pre-Civil War buildings than any other town in the US because the Yankees took Fort Fisher (over at Kure Beach, below Wrightsville and Carolina Beaches), so Wilmington didn't put up a fight. 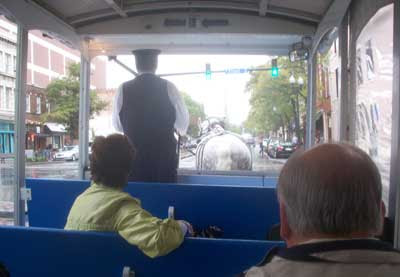 That's Fred and Henry pulling us. Or maybe Henry and Fred. The company uses all Amish rescue horses, horses whose natural gait is too slow for farmers to use. If not for this gig, the guys would have gone to the glue factory.

Wilmington has gorgeous buildings and homes, right next to buildings you wouldn't be caught dead near at high noon. Awful juxtapositioning! I was afraid to park my car. But boy, some of those million-and-a-half-dollar homes are fabulous. Spanish moss hangs from the trees, and many flower varieties that had given up for the year in my yard were still blooming their colorful little hearts out there. 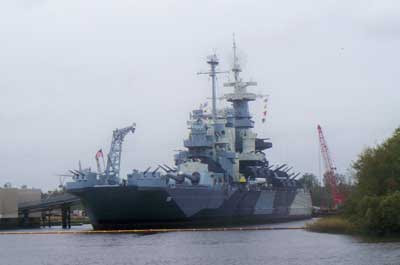 Went on a river tour and saw (among other things) the USS North Carolina, which is now a huge WWII museum. Back in 1971 when the people of NC bought it and brought it up river, they had to choose a full moon and high tide to get it into the channel. Along the way, it hit a floating restaurant, the Ark. According to our tour guide, the Ark was awarded a purple heart. Good story! I googled and discovered that the owner had a purple heart painted on the side of the repaired restaurant.

Anyway, they wanted to turn the boat around so its prow faced the city, but the ship got stuck and they said, "Oh well." Eight years later an elevator bridge was built nearby that, at its tallest, isn't tall enough to let it back through to the ocean. That boat ain't goin' anywhere now.

I had a nice lunch at downtown's Dock Street Oyster Bar, a cute place our horsey tour guide had recommended. Speaking of our guide, he was off to Charlotte the next day to die. In the past few years since Wilmington has become #3 in the US for movie work, he's become a part-time actor. This time the movie's shooting in Charlotte, and he gets to be some creepy guy who gets his throat cut. Cool.

For dinner, I went to the Fish House Grill near Wrightsville Beach. Excellent shrimp (I haven't had fried shrimp in YEARS!) and slaw. (Meh dessert.) (Excellent service!)

Another awful night (it didn't help that the blasting A/C/heater didn't do much besides make a racket), and I woke up to wind that was even more fierce than it had been the previous days. It was alternating rain and sprinkles. I had planned to have room service for breakfast, but faced with a choice of $20+ for an omelet delivered to my room or a free bfast if I went down to the restaurant, I chose the miserly route and was rewarded to find that their equipment had gone kablooey and that the chef was preparing omelets to order on a bunsen burner.

Omelets are my most favorite-est breakfast! Yum!

Went out, took some more pictures of the TEARING surf, came inside to read that SEP novel a bit more, then packed and left. It was so much easier getting out of Wilmington than finding my way in. Just follow MLK Blvd until it becomes the beginning of I-40. A mile down the road is that hilarious (but quite official) sign: "Barstow, CA—2554 miles."

So long, Wilmington! It was a great starting point for my exploration of the NC coast! Now, if someone could direct me toward some beaches that have a rocky quality to their landscape, I can start to get serious about checking out retirement possibilities.
Posted by Carol A. Strickland at 4:30 PM

I've never been anywhere along the NC Coast but Wilmington. Hubby likes going to SC for our vacations because his family did the NC coast thing growing up.

One of these years I want to do what you're doing and travel the Coast.

I am seriously looking for suggestions for retirement locales, Beth. I'm thinking something like Maine, but with a warm climate. Hawaii's probably a thousand times too expensive for my budget, but that's the general idea.