In my quest to explore NC on the least amount possible of money (tiny bank accounts created by all the projects around the house I've managed this year), I decided to concentrate on a more northerly direction from my trip to Wilmington last year. I'd begin at New Bern, NC, hit Oriental, then stay a few days in the Nags Head/Kitty Hawk area. I'd make room on the memory chips in my cameras, pack my French easel with some canvases, and order some easy-read novels. The weather forecast was for mostly sunny weather, and as the dates approached, the amount of sun on the 10-day chart increased. (Everyone laugh!)

Vacation arrived! Mapquest could use a little fine-tuning, but actual highway signage needs a firmer clarification. Twice I veered off the road I should be on, following "Highway 70" signs that turned out to be 70 business. Hwy 70 also didn't like to post speed limits but about once every 20 miles along the more deserted stretches.

But I left Hwy 70 behind and made it around the loooong loop-de-loop bridges hanging over the rivers at New Bern to discover a lovely little city. My friend Karen D., who had offered to show me around if I were ever in the area, had chosen that week to discover Ireland instead, so I made sure to take the introductory trolley tour to get the most historic info. Turns out I made the tour with about 5 minutes to spare, as they started (at least from my hotel) an hour earlier than what I'd been told.

Alice, the woman who narrated the tour as Clancy drove, was a font of information. Seems that Wilmington is known as the "city on wheels" (at least I think that was her phrase) because all the historic places are located in the corner of town bordered by two rivers joining together. If a building was historic and located elsewhere, it soon found itself moved into the historic district.

Alice said she could clearly recall when the riverfront was filled with ugly fuel towers, cranes and commercial whatnot. Not any more! Now it has a neat little park and clean streets dotted with historic sites. She told us about the original owners of the various sites: name after name after name, and eventually we began to see how everyone fit together. She emphasized the history-makers who were Black as well as white; female as well as male. (And the strange thing is that she told us how in one night 4000 Blacks were persuaded to join the Union army during the Civil War. On the trip back home I listened on WUNC radio to a historian who'd just written the biography of the amazing man who got them to do just that. Coincidence?)

The shops downtown are geared toward tourism: quirky stores, restaurants, art galleries. And of course, the birthplace of Pepsi-Cola. I didn't go there as it was getting late and frankly, colas don't agree with me these days.

It surprised me that Tryon Palace wasn't the original building. It had been rebuilt in (I think) the 20s, which is why it looks so crisp and new. Its stable is original, though, and George Washington may not have slept there, but his horse did. FYI, Tryon Palace is the symbol of New Bern being the official first capital of North Carolina. (Because people were taxed so dearly to pay for it, there was a small NC rebellion centered in the county next to mine, which resulted in a bunch of hangings that are noted on some historical markers I pass every morning on the way to work.)

There are bears everywhere! On flags, on store windows, sculpted like totem poles, playfully painted upon life-size fiberglass figures. Turns out that "bern" means "bear," and is the symbol of Bern, Switzerland, which is what New Bern is named after. You can get your picture taken next to any style bear you like in a little bear park downtown. No, I didn't see any live ones.

Because of its compactness, New Bern would likely only take a full day and a half to explore. This means I'll have to go back to check out the palace and its gardens at the very least. By the way, Karen, Clancy and Alice say they know you very well and wave hello!

The hotel clerk recommended Morgan's Tavern & Grill. I will never eat there again. The manager (? She didn't wear the same clothes as the others, and gave them orders) was wonderful and ready to take my order, etc at the drop of a hat. Good thing, because my waitress hardly ever showed her face. When the waitress refilled my tea, she didn't bother to refill the ice as well, so I was left with tepid tea. But the manager was super-efficient and friendly.

I ordered the crab cakes and a zucchini/broccoli dish. Though they were presented well, someone had added an odd herb to what should have been a simple veggie dish and rendered it, well, awful. The crab cakes tasted a bit like crab but a lot like nothing, and had no texture.

Ah, but the croissants! They served three as the dinner bread, and they were REAL croissants, not those Burger King doughy things. These were flaky and warm. At first I saw the drizzle of honey on them and said, "Honey with dinner?" and then "Honey on croissants instead of butter? Ruined!" but they were marvelous. Amazing. Heavenly. Nommy-num!

The manager saw I had barely eaten my dinner (I wouldn't have eaten any of it except the croissants, but I was starving), and comped a dessert, which I took home for breakfast. It was an experiment, bread pudding. I'd never met a bread pudding I ever liked, and this was no real exception.

But do go there for the croissants! Mmm! 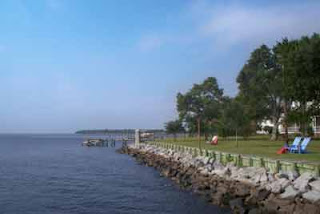 The next day I scrutinized the Mapquest maps and drove to Oriental, the "Sailing Capital of NC," to get some pictures that might make good paintings. People like paintings of sailboats, right? Rain was being forecast, but for some reason it held off. Unfortunately even by the time I found a little park on the Pamlico Sound/Neuse River, few boats were out. As I left I spotted a slew of 'em leaving the marinas. Darn it!

It's a bit of a rinky-dink town, but it does indeed have a bazillion sailboats moored and ready for fun. One of these days I'll learn to sail. 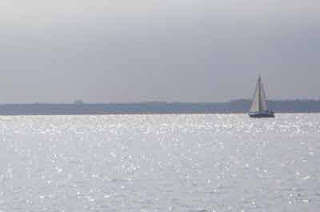 I checked with a hotelier to confirm directions from Oriental to Nags Head. She told me no no no, don't follow Mapquest's instructions. Skip Hwy 171 and just go straight up 17 to 64. Okay, I did that. And by doing so, added at least 25 miles to the trip.

The roads to the Outer Banks are flat and boring. Sometimes you have 4 lanes and can go 70 mph. Often you have 2 lanes and are stuck at 55 mph with nothing but scrub forest to look at. Occasionally the state puts up "Watch for bears" signs and "Do not feed the bears." I didn't see any bears. I assume they'd gone off to find more interesting venues. (Maybe they moved to New Bern.)

There's one stretch of 64 that's 2 lane, 55 mph, and over an hour long. No rest areas. No gas stations. No civilization of any sort. God help you should you break down.

Then suddenly you're in Columbia, and there's a rest stop! It comes with a wildlife exhibit house next door, and connects with a quaint riverwalk (it's the Scuppernong River) so you can really get out and stretch. I met a 77-year-old man there who'd climbed to the top of the Hatteras lighthouse the day before. That's right, 268 steps, and he'd almost chickened out halfway up. But people kept encouraging him and he advanced flight by flight, baking in the heat of the interior, until he emerged to the cool air at the top.

He said he and his friend go around climbing lighthouses and getting some kind of book stamped for each one they finish. He was proudly wearing his Hatteras Lighthouse tee shirt, and yeah, I said 77 years old. He did not appear to be in athletic shape, but he accomplished more than I would do!

Back on the road. Dull country... dull country... SCARY BRIDGE!!!! The Lindsey C. Warren Bridge is 2.8 miles across the Intracoastal Waterway/Alligator River, and has a draw bridge smack in the middle. I breathed shallowly and kept. my. eyes. on the. center. line. Whew! Through that.

By the time my blood pressure had returned to normal what happens but THE VIRGINIA DARE MEMORIAL BRIDGE comes along and is 5.2 freaking, curving miles over the Croatan Sound. In the middle is a high, arched section. The speed limit is 55. I went 40. My hands kept trying to jerk the car to the right. Just before the large arch, I wanted to stop. After the large arch, when I saw the bridge curving away faaaar into the distance, I wanted to stop in the middle of the roadway, get out and scream AIIIIIIIEEEEEEEEEE!!!!!!

Okay, so I'm a little claustrophic. At my Kitty Hawk hotel the desk clerk said she used to be the same way, clenching the steering wheel hard—so hard she had to replace it because she'd ruined it. "It's not as bad as the Bonner Bridge, though," she confided. Bonner Bridge? That must be one of those things in Virginia, I thought. Virginia has that whole ghastly Chesapeake Bay Bridge thing going, right? She told me that some of the supports for the Bonner Bridge floated and weren't connected to solid land. She and her co-clerk shuddered. Well, that was one thing I didn't have to worry about. 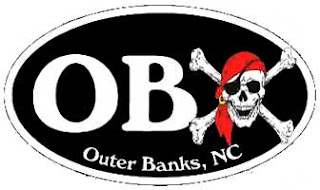 Posted by Carol A. Strickland at 6:01 PM

Sounds entertaining -- except the bridges. I never realized that bridges were a source of anxiety, but you're the second person I know who has that reaction. Tricky, if you live in an area with a lot of 'em! Look forward to the rest of the travelogue!