How to have a Frantic Vacation (part 1)

Friday afternoon: I turned my timesheet in to my supervisor. "What, you're not planning on being here Monday?" he asked.

"I'm on vacation next week." To Washington and Williamsburg.

"You are?" He'd forgotten that we'd discussed this quite thoroughly, etc etc. It's not easy to realize that you're so low on the totem pole at work, is it? Well, what can you do.

I left work, went shopping. Bought an entire underwear wardrobe. I'd been putting off buying new clothes, thinking, "I'll be a size smaller soon," at which point it would be time to gloriously go off in search of new clothes. But now it had reached the point of either wearing stuff that was practically in threads, or going commando. So shopping it was.

Along the way I stopped at Radio Shack. I hadn't been able to find the proper camera battery at Walmart. (The teenaged clerk looked at me blankly and asked, "a battery for a camera?" Well, excuuuse me.) After much searching, the RS clerk found the right battery. I asked him for two and explained that not only was I about to embark on vacation, but that my camera had a tendency to eat batteries. I wondered why he hesitated, but he sold the batteries to me.

He didn't bother to point out that these were rechargables. (Which are a good thing, if one has purchased the proper recharger, which I hadn't.) Or that these had not been charged yet.

On the way home, a semi tried to run me off the road. As I came upon it from behind, my guides warned me about the Impending Doom. "Pshaw," I told them, but sped up to pass him, just in case. And sure enough, about the time I got halfway up the side of the truck, he starts easing into my lane.

My car doesn't go "HONK!" It doesn't even go "MEEP!" It goes "meeeeh" with a sigh, which apparently finally caught the driver's attention. Either that, or it was me veering onto the rumble strip at the side of the road, which makes an awful racket. RAWR RAWR RAWR! The truck veered back into his proper lane.

That was getting the bad luck for the vacay out of the way ahead of time! Well worth it. 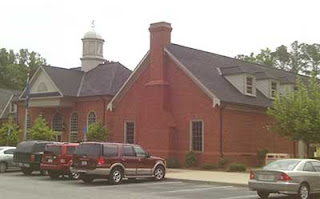 Saturday: I-85 through Virginia was a pretty drive, if kind of monotonous. Lovely woods overhung the road, with extremely rare breaks to show a lake or field. I came upon Mt. Vernon without any warning. Wait—that wasn't Mt. Vernon. That was the Virginia Welcome Center. They were ALL like this, apparently, with the usual bathrooms and vending machines, but with huge libraries of tourist booklets, and a large staff who guided you through the mysteries that are Virginia.

A few miles above Richmond was where the traffic jam for Washington began. Fifty miles of 30 mph bumper-to-bumper traffic in a 65 zone...Saturday at mid-day, in the middle of nowhere. As we approached the DC area, we did run into a couple of short tracks where traffic sped up to 65, but by now the speed limit was 55.

With the Mapquest printout in one hand, I searched for the signage I needed. Overpasses piled upon overpasses upon overpasses. At one point I was on the second overpass up, and at least 200 feet above me was another overpass. Why did it have to be that high? Were they leaving room for two more levels?

In the distance I saw concrete curlicues in the sky, some kind of large waterpark slide ahead? Close-up, these turned out to be exit ramps from those heavenly overpasses. Gaah—Glad I didn't have to drive that!

Mapquest turned out to be mostly right, and delivered me to the Hotel Monaco in Alexandria in late afternoon. A couple turns around the block revealed no parking spaces (besides, they were all parallel parking. Gahh!), but I'd been told to include valet parking in my reservation, so valet it was. ($25/day!) The Monaco is low-okay on my scale of hotels. Serviceable, but there was zero information. How was the hotel laid out? What did it offer? What was in the area? The hotel had no concierge, though the check-in clerks said they could give me all the info I wanted. They printed out a list of the names of local restaurants and their phones, with no other info, like maybe, what those restaurants specialized in, where they were located, etc.

My room had no coffee maker, no hair dryer, no grab bars or safety flooring on the shower.

But it was a great location, right in the lower heart of King Street, which seems to be the main tourist drag in Alexandria. There's a free trolley that runs the length of the street, from docks to Metro—but it starts at 11:30 am, which means that if your day begins before that, you're SOL.

The Visitors' Bureau is two blocks away, manned by helpful employees with handfuls of brochures. King's Street is filled with restaurants, cafes, ice cream parlors, clothing stores, and tourist shops. Lots of people walk their dogs there, and the various shops have water bowls set out for their convenience. 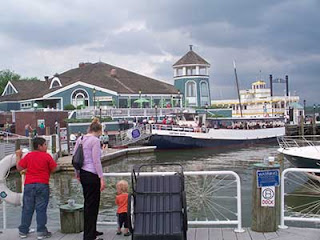 I went down to the docks and decided to go ahead to get tickets to the Mt. Vernon cruise, even though it wasn't until Tuesday (cue ominous music). Storms seemed to be coming quickly; wet weather was predicted for most of the week. Thus I made a quick retreat to have dinner at "The Wharf" restaurant—overpriced, but everything on King's Street is. A talented trombonist had been playing on the sidewalk outside my window before I'd gone out exploring, and he was still at it when I returned. No one paid attention to him. I walked a half-block away before I got the guilts and turned around. A lady in front of me plunked some money in his cup just ahead of me. Then back at the room I heard a clamor from outside. A large group of high school-age kids had gathered around the trombonist and, one by one, they contributed tips to his cup.

Tomorrow's agenda: I would have to listen to a 2-hour "buy a vacation condo" presentation (the reason for the trip), after which I'd spend the rest of the day in DC, vacationing. Oh, the best-laid plans...
Posted by Carol A. Strickland at 3:26 PM