How to have a Frantic Vacation (part 3) 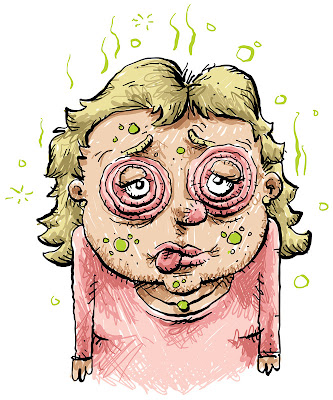 Decided to skip Mt. Vernon and tried to give my tickets away. The doorman snatched them out of my hand; I don't think they found a new owner.

I'd had a sleepless night, and had whiled away some of the hours by looking over all those Wyndham catalogs and their points. Turns out that the vast majority of these spots are only affiliates, and require points-plus in order to use.

We'd been shown a "typical" vacation unit: plush bedrooms, dining room, full kitchenette, living room, multiple bathrooms, at a resort with pools, spas, etc etc. Now I noticed all the listings that noted that only a microwave and dorm-sized fridge came with the place. Most spots had "high" and "low" vacation times mapped out, with varying points required. I checked the ONE place they had in San Francisco: every week was a "high" week, and every week required 300,000 points.

Waitaminnit. I checked the spots I wanted to go, the ones where the salespeople (including Ms. Germy) had encouraged me to dream about. VERY limited units. 300,000 points. 100,000 points. 90,000 points/night. Some places were fairly far from where I actually wanted to go, like the one Montreal-area spot that was actually 40 miles from Montreal. For overseas travel you had to commit to an entire week at that spot, whereas for places 100% within the Wyndham system (within the US) you could take one day here, two days there, etc. If and when I go to Europe, I'll want to stretch out the ends of a tour, not stay at one spot for a long time. (Unless I'm painting with a group in an area, but that would likely be an exception.)

Checked the paperwork, which told me that I not only had 3 days to cancel, but 7. Wobbled down to the sales office. They sent a germ-free guy (not for long! HA HA HA!) to talk with me. A woman accompanied him but stayed a distance from me and my germs. They told me that no no, I was misunderstanding and that there were variations to the system that most people used instead of the points in the catalog. I asked why, if this were the case, I hadn't received a mountain of info about that instead of the 40 pounds of catalogs detailing points.

"Then tell me that in writing." They didn't. I wrote out a note saying I was canceling everything, they photocopied it, I handed over the bag, and went back to the hotel. Managed to grab a to-go bowl of soup on the way back.

Napped on an off the rest of the day. Managed to read a fairly good SEP book (she was in her Psychoanalyst Mode) and a Big Name Author's novella. I'd read her first book, hated it with a passion, and watched her star rise over the years since. Thought it was time to try her again, as she must have improved. She hadn't.

Later that night I ordered from Monaco room service. I don't approve of room service (except maybe once a year, for breakfast) because of the prices, but I was slightly hungry and was not ready for auto-cannibalism yet. So I got a grilled cheese sandwich. Actually, it was quite good. But not $19 good. 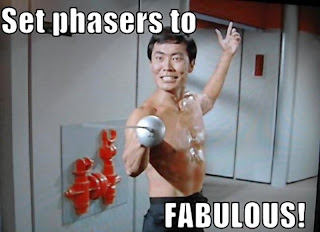 Wednesday: Watched My Three Sons, an episode taking place in Hong Kong. George Takei had a minor part. I think he was supposed to be Chinese. Even so: an omen of a good day to come!

Throat felt better (it would return with a vengeance on Saturday!), but the stomach bug was still with me. A half-bottle of Pepto pills kept it at bay. The fever seemed to break around noon, as I was traveling to Williamsburg.

This time the traffic wasn't so bad. It was merely bumper to bumper for about 20 miles instead of 50. After a couple of false turns I found the hotel, the Hampton Inn. It was okay. You know, all hotels should be required by law to have at least one comfortable reading chair, with accompanying reading light. Why is it so difficult to find such?

Shuttles run all over the Colonial town. You can rent costumes for your kids to wear as they wander the city. I noticed that none of the tee shirts available throughout Colonial Williamsburg came above XL size, and the ones at the Visitors' Center were all ridiculously priced—well over $20 each. I went to K-Mart and got some (still couldn't find XXL) for $12/ea.

Just to get into the mood of the place, start off at The Story of a Patriot, the longest-running movie in history. Ever since it was made in 1957, the Visitors' Center has been playing it. A young Jack Lord (Hawaii 5-0) plays a newly-elected member of the VA colony legislature, a Tory, who eventually becomes... oh, you guessed it. The movie was shot in Colonial Williamsburg and various surrounding plantations.

But the most amazing thing for me was that, except for the heavy eyebrows (maybe even WITH them), the light brown-haired Lord came off as a dead ringer for Mark Hamill, circa Empire Strikes Back!

Started strolling, only to be confronted with Brigadier General Benedict Arnold, who advised the assembled crowd that Williamsburg had been captured by the British. All would be required to take loyalty oaths to the Crown.

He reminded us that taxes were a hundredfold worse than they had been before the revolt had begun. He magnanimously informed us that in return for our loyalty, Britain would no longer tax A or B. (I forget what the items were.)

Murmurs came from the oddly-dressed members of the crowd: "But they haven't taxed those things for years!" General Arnold did not seem to care about the increasing tension as more and more onlookers began to boo him. He rode off.

A Black woman and her husband confronted each other about which side they'd take now. When the husband ran off, the woman found her best friend and they discussed the matter in the view of what was best for their families. The British were offering freedom to all slaves; the Americans were not. 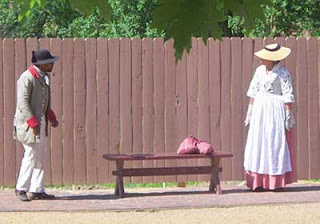 Then a Black preacher gave a rousing sermon and had us all shouting, "Amen!" when he pointed out the hope America stood for. Together with a white preacher, the two came to the conclusion that America must remain a place of religious freedom, and that religion and the state needed to be kept separate. Surprisingly, none in the crowd objected. [Note: all religions referred to were of the Christian variety.]

I ate at Shields Tavern, where the portions are all too enormous. One of the specials was an 18-ounce steak. Most tourists are not going to be able to store leftovers. Do they truly want people to chow down on 18 ounces of beef? Still, the pork tasted very good, and the tea was excellent.

A wandering minstrel played terrific guitar and fife tunes, but the personal attention was uncomfortable. Were we supposed to let our meals get cold while we listened, or were we supposed to ignore him and eat? And what about tipping?

My hotel had a laundry room, and I took advantage of it.

Tomorrow's agenda: More Williamsburg. I'll hit Jamestown on my way out on Friday.

Posted by Carol A. Strickland at 8:02 PM

Note: The Wyndham people were rather nice about canceling everything. About a week later I got a letter confirming the cancellation. A week after that I got my new Wyndham VISA card in the mail, called, discovered that Wyndham had charged me $4000 and put it on this card, but within four days from there, the charge disappeared and I was able to cancel the card.

Then the day after that I get an email from Club Wyndham announcing that they have this marvelous program they want me to hear about, and wouldn't I like a free stay at Orlando with a certificate to get me a short cruise if I stay to listen to a sales pitch?

Maybe one of these days when they clean up their act a little more and have a better network, I'll join.

(The $4000 was downpayment on the club membership. It's not like they were ransacking my account or anything.)