How to have a Frantic Vacation (part 4)

Thursday: Heavy rain is forecast for all day. (It would not begin until late afternoon.) I decide to head for Jamestown Settlement, of which at least a part is under cover, but wind up saying what the heck and taking the first shuttle stop to Jamestowne, which will be a quickie.

Jamestowne (or James-towne) is the actual site of the first lasting English colony in the New World. They have a column set up that, if you look past it into the water, marks the site the first foot was placed on what was then land. The fort's foundations have been found (again, one side of it extends into the water, as the bay has grown on that side) and there are archaeological excavations going on. 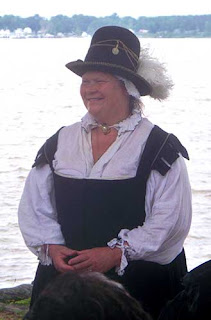 I arrived too late to catch the name of our guide, but she'd been 14 or so when she'd arrived on the third ship to come to Jamestowne, and she'd been one of the few survivors of the famine. Eventually she married a man who'd been on the first ship. They'd gone back to England, the man had been promoted and given a good position and pay (she gloated how she'd chosen the right guy), and eventually they'd returned to America. 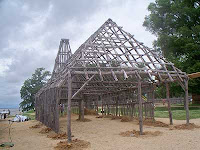 She gave us a great intro to the site and told us about the research people were doing in these Modern Tymes to discover what life had been like. She made sure we knew about "Jane," the 16 YO (? might have been 14) girl whose remains had been found very recently, who was the first real evidence of cannibalism that had been made necessary by that famine, when the settlers had been too terrified to leave the fort to gather food.

There's this twiggy version of one of their buildings, and there's also a brick church—but that church was a later one, done towards the end of the 17th Century. The chimney's an original one, though.

One of the excavations concerns a bakery. They've just taken it down to the level where people of the day would have actually been walking. The clay has been baked hard by the ovens, and work there was considered punishment duty because of the heat.

You can see the battlements in the background. The fort was triangular. Though the Indians were semi-friendly at first, after Powhatan died things got nasty.

Powhatan had a famous daughter, Pocahontas, aka Matoaka, aka Rebecca Rolfe. Somewhere at the site I remember seeing that her marriage to John Rolfe was her second, with the first husband having an Indian name, but I don't see that in her Wiki entry. 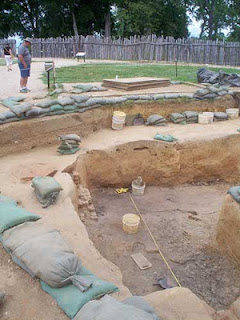 I do recall thinking that this would have been an interracial marriage. Wiki confirms that it is the first recorded one in American (I assume they mean USofA) history.

Too bad that Pocahontas had to catch some disease and die in England, before she could return home.

There's a museum at Jamestowne that has a lot of bits and pieces of Jamestowne life, as well as a reconstructed face for Jane that makes one feel more than a little queasy, as she's depicted so bright and healthy.

Now I'm off to Jamestown (no extra "e") Settlement, just down the road. It's got a huge building with all kinds of info and mini-movies realating to various aspects of Jamestown life. There's a really nice juxtaposition of exhibits on life in Elizabethan England, Powhatan Virginia, and Western Africa. They really are trying to showcase Jamestown as the confluence of three different cultures from three different continents.

They have stunning life-size statues of Powhatan and African leaders who have direct ties to Jamestown. 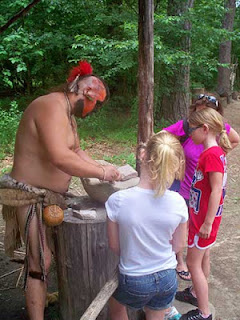 Luckily I explored the outside first, while the sun was out. They have a Powhatan village set up with costumed inhabitants patiently explaining crafts like fletching to little girls. 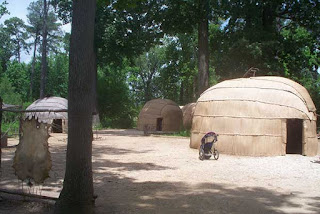 Here you'll also find a reproduction of how the fort at Jamestowne might have looked, reconstructed. There's a blacksmith shop and other things to learn from. The living quarters have clay —not dirt—floors. Cool. The guide there gave me the names of two books about historical cleanliness and such, since I was asking questions about it. How nice that the guides—all of 'em, it seems—know so much about so many aspects of life back then! 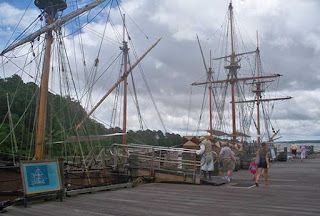 Down at the docks you'll find four ships, equipped with crew who are delighted to explain things.

The "big movie" inside the main center was interesting enough, as again, they were focused on three cultures. Their historical African "star" (the person they focused on) was a woman who had originally been a prisoner of war, given to the Portuguese as a slave, and then had her slave ship hijacked in the Caribbean by the English—using the same ship that had carried Pocahontas to England, as a matter of fact. The slaves were brought to Jamestowne to be the first 20 Africans brought to the British New World. The woman was listed as having survived many years later, though records weren't clear as to whether she'd been freed at some point or not.

Coming out of the movie I noticed they'd added a noisy waterfall soundtrack to the Powhatan exhibit. Then I saw some windows. The sky had opened up. Williamsburg and vicinity got more than 4 inches of rain that afternoon. (Plus Yorktown got a tornado, I think.) It was bad enough that I got myself to run when I saw the bus pulling up to the stop, so far from the center's entrance.

So the real shuttle arrives and we take off down the Colonial Parkway through the storm. The driver paused at the edge of the Jamestown property to talk on the radio. He kept talking as we made the journey back. I heard "One foot deep," and so we all tried listening in. The bus was spewing great fountains of water to either side as we sped through the lush swamps.

At one point he stopped again, but opposite traffic also stopped. A large flock of ducks (babies included) had decided they wanted to cross the road. So cute! And there were so many ducks! A few decided they liked the side they were on. 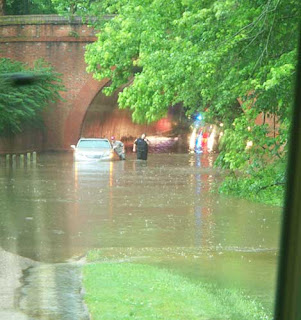 Then we approached a tunnel and the driver stopped. We watched a gray car stopped in the road, just coming out of the tunnel in the opposite direction. Then a pickup drove out, swooshing through the water around the car. A tiny red car followed, with us taking bets as to whether it would make it. It did. But Gray Car sat there, its blinkers on.

Our driver was having many conversations on his radio. We learned that the cops had stopped traffic on the other end of the tunnel. Traffic inside was turning around.

Then our end of the tunnel lit up with red and blue flashing lights. The police! But it was both police and park rangers (the Parkway is part of the Federal Parks system) who pushed the gray car out. The cop was a pretty hefty guy, so I was impressed. As you can see, the water was darned deep. The cop said that that was actually the shallow side; the other side was waist deep.

A drain did away with the worst part of it fairly quickly, but someone had not put the drain at the road's lowest point, and so knee-deep was where things stayed as long as we were there.

The gray car now out of the water, the driver's side door opened and—waterfall! Water POURED out of the car. I'm ashamed to say that we were greatly entertained. One guy on the bus began to go on and on about how much it would take to fix that car, which switches needed to be replaced, etc.

"That car's toast," I countered.

A guy from the back hollered, "Nobody buy a used gray Lexus from a Williamsburg dealer!"

We got more chuckles as one of the cops leaned over and began scooping more water out of the car's interior. Bad us.

Big Cop came to the bus and helped us back down the Parkway. Turns out we weren't that far from Coll. Williamsburg. Figured I was already as drenched as I could get, and so caught the local shuttle to the Dog Street Pub, where I'd been told I could get the area's best hamburger. It was indeed, and would have been a very nice experience if the waiter hadn't been so condescending.

On the shuttle back to the Visitors' Center, we tried to convince the driver that he wanted to deliver us to our cars. He didn't buy it, darn it. So with lightning crackling right above, I duck-ran to my car, sitting so lonely at the very farthest reaches of the lot.

Friday: On the way out of town, I stopped at the Visitors' Center to take some quick shots of the landscaping that I want to copy. The camera's battery was dead. I reached into my purse for the replacement batteries, discovered that they were rechargables that hadn't been charged before packaging, and delivered a deadly curse to a certain clerk at Radio Shack. Bad, bad me. Luckily, I have a backup camera in my purse.

Farewell, Colonial Williamsburg. I have seen as much of you as I wanted to. I do want to go back for three days to finish Washington, DC, though. Next time I'll take the train and maybe stay at the Alexandria Hilton, which is right across the street from the Metro. One day for one side of the Mall, one day for the other, and one for Mt. Vernon. That sounds easy enough on the footsies.

I'm taking real, prescribed medications now, but recovery seems to be slow. All Williamsburg/Jamestown seemed to be coughing on Thursday. Thank goodness it happened on vacay, right? Not on a work day when it would have interfered with something important.

So: Have you visited any of these places? What stuff did you like best? Not like? What did you miss that you feel you need to go back for?
Posted by Carol A. Strickland at 9:38 PM