How to have a Frantic Vacation (part 2)

Sunday: I was determined to make this vacation a relaxing one, so I dawdled during the morning. The best thing about the Hotel Monaco? It's located next to "La Madeleine," a little French cafe/bakery that serves bits of heaven on a plate. Breakfast there was bliss!

Then it was off to the Wyndham to get their sales presentation. Apparently the Wyndham people don't know where they work, because their directions were awful. It took me asking twice at the Wyndham resort to get to the proper area. If you started out in the pits of their parking basement, the route was well-marked. The trick was in getting that far.

Well, the joint was packed, and lots of people had brought their hordes of young kids. The adults were ushered into a room where a salesman who obviously had had Southern Minister training provoked the crowd into a froth. His boss was gone today, he told us, and this was his final working day this week, so the 2-hour presentation would be condensed into 20 minutes, and didn't we appreciate that? This way he could hit the road when we were done.

Ho boy, and this is just the beginning, I told myself. After 20 minutes, halleluiah, we were ushered out to speak one-to-one with salespeople. Mr. Southern Minister had to stick around because they had an entire new group coming in. (I mentioned the 20-minute special days later, and the Wyndham rep then nodded as if this were SOP, which I had suspected at the time. Never believe a salesperson in these circumstances.) My Personal Saleslady kept coughing as she sat beside me. "Just an allergy, sorry," she said.

Anyway, she and her supervisor (always a bad thing when sales people double-team you) told me how Club Wyndham works: You pay X-many dollars and get Y-many points. You then use the catalogs to find where in the world you want to vacation (and Wyndham has sharing plans with other chains throughout the world), and use your points to have a great time.

The cost was about that of a used Honda Civic, financed over 10 years. I had to tell the guy to shut up a minute, while I figured costs per year (my math brain center had completely turned off—not a good thing during a sales presentation) and how that compared with my usual vacation spending habits.

In the end I decided that it seemed a good deal. Okay, I'd give it a try. Good grief—I was buying in essence, a vacation home! As Ms. JustAnAllergy sneezed on me, I signed a small mountain of papers, everyone shook germ-filled hands, and I staggered out... Four hours after I'd gone in.

I'd planned on leaving for DC immediately (especially since Wyndham was right across the street from the Metro), but now had to lug the huge attache of paperwork and catalogs back to the hotel room. After that, it'd be too late to go anywhere. Oh well, I'd just walk around King Street instead.

Went to Lancini Brothers for dinner and wound up with a show as well. My first mistake came when I didn't stop the waiter when he was reciting specials. Instead I got which ones sounded interesting mixed up, and when I said, "tell me about the crabs again," I should have said, "tell me about the clams again." So I didn't get to sample stuffed zucchini blossoms, which I've never had.

I sat in the middle of three tables, all of which had one diner. The woman to my right had come in with me, so we were ordering at the same time. The bar was in front of us, filled with older, paunchy people, mostly guys, watching the baseball game. Then a balding guy with carefully-groomed five o'clock shadow and a linen suit that at one time long ago had been wrinkle-free, walks up to the bar to stand and wait. On his arm is a tall, lanky woman with long blonde hair (except for the top, which was dark). I can only see her back, and it looks like she's wearing a black, shapeless vest with glass beads sewn around the arm holes. Below the vest: lace panties.

Okay, they were beige shorts, but they were layered in strip upon strip of wide lace, and the shorts were VERY short, so at first and even fifth glance it seemed like they were panties. Below that, she wore day-glo orange, 4"-heel sandals.

I REALLY wanted to take a picture of this chick. Suddenly a flash went off. The guy to my left had done just that. The chick didn't turn to look; obviously she was out to get all the attention she could. Later, the woman to my right exited the same time I did. She confided that she'd taken a picture as well, of "the pertinent part." She also offered her opinion that the chick in question was a Lady of the Evening. I agreed that she certainly was portraying herself as one.

Lancini's chicken dish was fine, but the triple chocolate mousse for dessert (white, milk & dark) was FABULOUS, and the three raspberries that came as garnish were exquisite.

Tomorrow's agenda: Into Washington at last! About time. 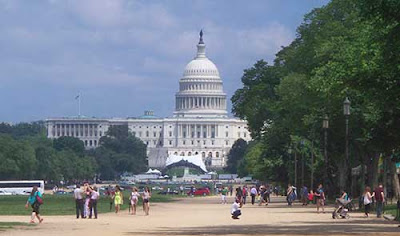 Monday: ARGGGHH, my feet, my feet!

I took a taxi to the Metro, which cost $6 (it's $3 just to sit in a taxi), but the driver said he could drive me to the Smithsonian for around $21. I begged off, wanting to become familiar with the Metro. But the DC Metro is confusing. You have to figure where you're going that day, compute the distance, then compute how much $$ to put on your Metro card to pay for that distance. Why not just issue a Metro Day Pass?

It was drizzling as I got out at the National Mall, just below the Smithsonian castle. Figured I'd best lumber to the Lincoln Memorial et al before the rain really got going. I'd forgotten that the earthquake a year and a half (or so) ago had damaged the Washington Memorial, so it's closed for repairs. It's a bit of a walk down there from the Smithsonian, but once you're there, if you squint into the faaaar distance, you can see the Lincoln Memorial.

School buses alternated with tour buses in the parking lots. Lots of 'em. Lots and lots of 'em. A mass of grade schoolers were dipping their arms into the Reflecting Pool, and I felt sorry for their teacher. After a while they started shrieking, "Baby ducks!" Sure enough, there were two family groups out there, one with tee-tiny ducklings who had just the mother, and another with both sets of parents who kept taking off and coming back to their entourage of much-larger kids. 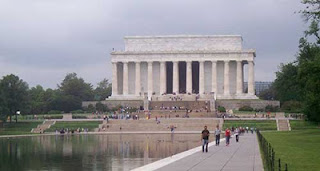 I decided to Plan Ahead and save my feet by avoiding going into the Lincoln Memorial. To the side was the Vietnam Memorial, where signs are posted for quiet and to be respectful. Everyone observed this except for three teenaged girls who giggled and gossiped until they finally realized they were the only ones making noise.

One woman knelt and was doing a rubbing of one of the names. Very moving. One passing idiot turned to his buddy and asked what the heck she was doing.

The WWII memorial was surprisingly amazing. I thought the plan to interrupt the Mall layout was stupid, but once you're there, it's darned magnificent.

I missed the Vietnam Women's memorial. My map said it was right there, but I didn't find it, even when I doubled back.

Someone in the crowd was stinky. I sniffed closer. It might be me. Either my deodorant had worn off early (it's a new brand for me) or the changed morning routine had forgotten it. I reeked. Sorry, DC.

By now it was sunny, so I set off vaguely in the direction of the Smithsonian with an eye out for a public restroom. Targeted the one on the map and wound up on the Ellipse in front of the White House. There at the side was the restroom facilities, and a sorrier restroom would be difficult to find. You had to descend into a dank dungeon, and the floors were wet and almost nothing worked. This is a major tourist spot; things should be immaculate!

I noticed that there are a lot of skinny people in DC. Must be all the walking.

I only concentrated on the portraits at the Portrait Gallery, which sounds stupid but the gallery is allied with another one that I can't recall right now. And I only did the first floor. Or the second. Whichever one it was I entered on.

I think portraits and I think paintings, but they had lots of photos and some statues. The best statue I saw was a bust of George Washington Carver, who was portrayed as one heckuva hunkasaurus. Woof! Imposing and sexy as all heck. They had a "feminists" corner with Elizabeth Cady Stanton et al, and a few portraits of some famous Native Americans. I wish someone had done Sacajawea's portrait.

Anyway, I felt guilty for taking the gallery at a run, even at hobble pace. It's a place that deserves a much lengthier perusal.

Now I needed to hit Union Station. I've been there before, but now it was an important scene in a book I'm writing, and I wanted to make sure I'd gotten it right. I hadn't; changes will be made. I then took the Metro back to the Smithsonian. Whew.

Sat a long time on the Mall working up the energy I imagined the Smithsonian Castle would take. Saw a small army of Segue beginners receiving final instructions before starting out on their tour. A cop on horseback watched them, which I thought was some kind of technological irony.

Finally went into the Smithsonian, where the creme de la creme of all the museums are displayed. What? They aren't? The Smithsonian castle is merely an information kiosk these days? Everything is kept in separate museums?

Arf! Arf! my feet howled. I went out back and sat for a while in the garden. I could hit the Hirshhorn at least, right? Wrong, my feet replied. I tried a few steps in the Hirshhorn's direction just to spite them, but they turned me around and headed toward the Metro. Traitors.

Sitting in my Metro seat, I thought the back of my throat felt a little scratchy. The vibration of the car was making me feel a little peculiar. How odd.

On the way out of the Metro, you have to insert your ticket into the box and if you haven't paid enough, you have to go back and pay until it will let you out. My ticket went in and popped out as usual, I stepped through—and the gate wouldn't let me. I checked the message window. It didn't say anything about "Pay up, deadbeat." I tried again. And again. Finally half the gate let me through. I flagged down the station person and asked her what the heck was going on. She shrugged. "You got out; no big deal." Well all right then.

Throughout the day people had been extremely friendly and helpful in directing me through the various puzzles of Washington, and I had seen that others had also been helped. Thank you, all!

Tomorrow's agenda: a cruise to Mt. Vernon!
Posted by Carol A. Strickland at 5:31 PM